A very relevant book in the MeToo era, this is a story of abuse and power, and also of female friendships and how they can often become toxic. It’s incredibly thought-provoking and made me consider how much women’s behaviour, both conscious and subconscious, is dictated by men. It chimed in with some of the reports we have been hearing in the news over the last couple of years.

I loved Keeper, Jessica Moor’s first novel, and Young Women is an excellent follow up. Whilst the stories themselves are quite different, the underlying message is not and I look forward to Moor’s third book in the hope that it is equally as insightful and relevant.

There’s a moral dilemma to be found between the pages, I suppose one of whether we see abuse of women as something that is personal to each one or affecting us all, whether or not we have personal experience of it. Either way, it illustrates the battle a woman has ahead of her in proving it.
Young Women is a razor sharp novel that slices to the heart of our most important relationships, and asks how complicit we all are in this world built for men. 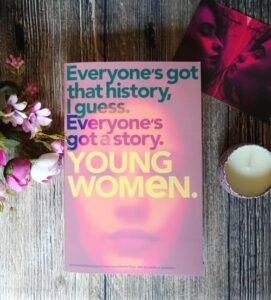 Young Women is narrated by Emily who meets Tamsin at a protest. Instantly she is beguiled by her and they become friends. Emily constantly tries too hard whilst Tamsin seems to find everything effortless but there’s a lot hovering beneath the surface and Emily starts to discover what that is and finds out more about her new friend.
This is not a particularly long book at just over 300 pages but it packs a punch. Despite the difficult subject matter I found it easy to read and I raced through it. It’s a slice of life story, a snapshot of a particular time in Emily’s life. I didn’t always like her very much and found her quite selfish, contrary and easily influenced, but she made for a fascinating character to read about.
Jessica Moor studied English at Cambridge before completing a Creative Writing MA at Manchester University. Moor was selected as one of the Observer’s debut novelists of 2020, and her first novel, Keeper was chosen by the Sunday Times, Independent and Cosmopolitan as one of their top debuts of the year. Keeper was nominated for the Desmond Elliott Prize and an Edgar Award. Young Women is her second novel.

Tamsin is the friend Emily has always longed for; beautiful, fun, intelligent and mysterious and soon Emily is neglecting her previous life – her work assisting vulnerable women, her old friend Lucy – to bask in her glow. But when a bombshell news article about a decades-old sexual assault case breaks, Emily realises that Tamsin has been hiding a secret about her own past. A secret that threatens to unravel everything . . .

Young Women by Jessica Moor will be published on 26th May in hardcover, eBook and audiobook by Manilla Press. My thanks to the publishers for the proof copy.