But when Rozie receives a threatening anonymous letter, Elizabeth knows dark forces are at work – and far too close to home. After all, though the staff and public may not realise it, she is the keenest sleuth among them. Sometimes, it takes a Queen’s eye to see connections where no one else can . . .
The Queen is having a bit of a time of it too. Not only has she got to stay neutral on the referendum and the US elections but she’s spotted a painting of hers that should be in her bedroom and not in the building she’s seen it. Not to mention the body that her Private Secretary has just found. Her Majesty knows it’s down to her to figure it out, or rather by having Rozie doing the investigating that she asks of her. After all, the Queen can’t be seen to be playing Sherlock Holmes.  Rozie finds herself investigating the murder whilst delving into the history of the art works belonging to the royal family. Not only that there appears to be a poison pen writer at work in the palace and Rozie has found herself as the latest target.
Queen Elizabeth II is having a royal nightmare.
Slowly Rozie and the Queen discover that the present day happenings are related to the past. As Rozie delves more into what happens, she and the Queen have to direct the police’s investigation in the right direction without it seeming to be that way. In a building containing 775 rooms, there are plenty of closets to hide skeletons in. Rozie soon finds that there are machinations in place that have remained hidden for some time.
As Her Majesty looks for answers, her trusted assistant, Rozie, is on the trail of a treasured painting that once hung outside the Queen’s bedroom.
The victim wasn’t well liked, but purely because of what was seen as spiteful tendencies. However, that dislike doesn’t seem enough to manifest itself into murder, and there are those in the palace who had been saying it was a tragic accident. Rozie finds herself going to from having too many suspects to none at all as the trail runs this way and that.
Source – review copy 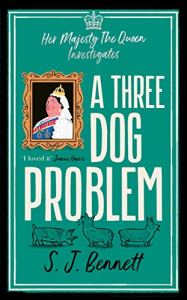 A referendum divides the nation, a tumultuous election grips the United States – and the body of a staff member is found dead beside Buckingham Palace swimming pool.
Sir Simon, the Queen’s Private Secretary, has had quite the time of it recently. So he decides to head down to the pool at Buckingham Palace for a relaxing swim. Instead he finds the body of a housekeeper. Her Majesty is soon on the trail, ably assisted by Rozie, her actual assistant. Is there a murderer walking the corridors of the palace? It’s all a bit of a conundrum, or as Her Majesty would call it, A Three Dog Problem.
I thoroughly enjoyed joining Rozie on her latest investigation and A Three Dog Problem allowed the reader to see her character, and the other recurring characters, to develop. I’m already looking forward to seeing what Rozie and Her Majesty get up to next.
Published by Zaffre
Publication date – 11 November 2021
This was another fun investigation for Her Majesty and Rozie. There’s a gentle humour that is woven throughout the story. This is a book you can curl up with and know that you are going to be entertained for the next few hours.
Is it a tragic accident, as the police think? Or is something more sinister going on?