I loved this multi-generational book and all the characters who it focussed on. Matelda is an elderly Italian grandmother who wants to pass on what she knows about her family’s past before she forgets. Adriana writes beautifully about the tender love between Matelda and her husband Olimpio. Matelda’s mother was Domenica who was a clever, spirited woman who nursed during the Second World War. She has two wonderful relationships at different times in the book and there is strong focus on her husband who was a Scottish captain. This marriage sees her move to Dumbarton and become part of the Italian ex-pat community there. Adjusting to life far from home is not made easier by her horrible mother in law! The final link in this generational story is Matelda’s granddaughter Anina who is very much inspired by the strength of her female relations past and present.
Then, on an idyllic French coastline in the shadow of war, Domenica’s second great love affair, which would go on to define her – a mysterious captain, with a future on the front line.
But as she works against the clock with her own daughter to unpack their family’s legacy, more questions arise than answers.What was the real story of her mother’s wartime years?Many decades later, only her daughter, Matelda, knows the true story of these two men’s lives, and the secret that connects them. And, as the end of her life nears, Matelda realises that some truths are too great to be lost.I’ve read most of Adriana Trigiani’s books and I have to say that I think this is up there with her best. The Good Left Undone is a satisfying family saga, an epic love story and such wonderfully evocative historical fiction.About the bookAnd what, ultimately, brought her home again? . . .Adriana Trigiani is the Sunday Times and New York Times bestselling author of twenty books in fiction and non-fiction, which have been published in thirty-eight languages around the world. She is an award-winning playwright, television writer/producer and filmmaker. She wrote and directed the film version of her debut novel Big Stone Gap, and adapted her novel Very Valentine for television. She hosts Adriana Ink, which features the world’s greatest authors in conversation. Adriana grew up in the Appalachian mountains of Virginia, where she co-founded the Origin Project, an in-school, year-round writing program that serves more than 2,500 students grades 1-12. She lives in New York City with her family. Follow Adriana on Facebook and Instagram @AdrianaTrigianiHow gorgeous is that front cover? It really is perfect for this beautifully written, hugely atmospheric new novel from Adriana Trigiani.
There are many secrets hidden in the past and as a reader we’re privy to some information before the characters are. However, even we don’t know the whole story and that’s what makes this such a compelling read. I loved the way the story meandered from one character to another and from past to present with a little bit more being revealed through each character’s experiences.
About the Author
The first, her childhood sweetheart: a boy from the same small, sun-drenched Italian town of Viareggio. A romance born out of yearning and shared history; over before it really had a chance to begin.
The story is set in Italy, Marseille and Scotland with the Second World War having a profound impact on the narrative. The author really shows the effects of the war on the Italian community both at home in Italy and in the UK. I knew that a lot of Italians had settled in Scotland around this time but didn’t really know much about the community and it was really interesting, though often sad, to read about how this immigrant community were treated during the war years and after. I hadn’t heard of the Arandora Star tragedy which features in the book and came across this interesting article where the author explains how she learned about it and why she felt she had to incorporate it into her story. https://www.bbc.com/news/uk-scotland-61234271
What kept her away from Italy for so long, after the fighting had ended?
Domenica Cabrelli had two great loves of her life. 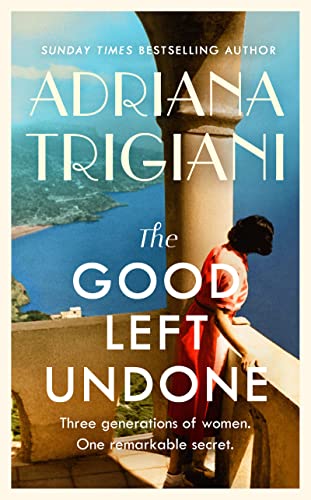