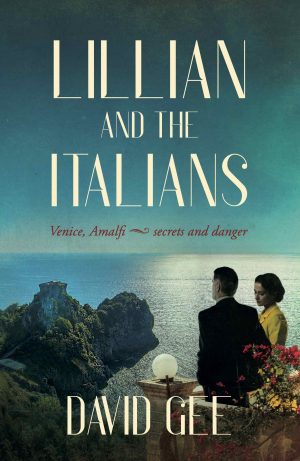 David Gee was born and raised in Sussex.  After attending Birmingham University he worked in telecommunications and journalism in London and the Persian Gulf. Lillian and the Italians was largely written “on location” in Venice and on the Amalfi coast. His previous novels include Shaikh-Down and The Bexhill Missile Crisis – a prequel to Lillian and the Italians. He now lives back in Sussex, on the South Downs near Brighton. His website and blog are at: www.davidgeebooks.com

With another klaxon belch from its diesel engine the train began to slow, no longer overtaking cars and buses on the adjacent road bridge. When Lillian and George came here on their honeymoon in 1935 the train had been drawn by a steam engine which whooped and whistled. Its elegant wagons-lits were very nearly as romantic as the Orient Express (‘We can’t afford that,’ said George, lumberjack turned builder. Lillian, the property developer’s widow, could now afford the Orient Express but it had stopped running in 1962). Today’s train had ordinary carriages and modern sleeping cars that were about as romantic as a camper van. And Lillian was alone in her stiflingly hot First-Class sleeper – a widow since last year, her children and grandchildren scattered to the winds.
AUTHOR LINKS
‘Listen, lady,’ the porter began in a confidential but worldly tone, leaning on his barrow, ‘I make you da proposition. Porter not s’posed to go after da front of da stazione, but for one t’ousand lire I take you and dis cases to your ’otel. Okay?’

EXTRACT
Looking for her wayward son in 1960s Italy, an English widow encounters revelations and begins a dangerous romance.
It is extraordinarily difficult to establish Venetian facts.  – Jan Morris
In Venice Lillian Rutherford meets the ex-gigolo who has shared the last four years of Andrew’s life; his disclosures force her to confront a side of her son that she never suspected. Going on to Amalfi, she meets the charismatic Prince Massimo Monfalcone, whose playboy son is being held to ransom in Corsica with Andrew. Massimo distracts Lillian with his life story: his first wife was murdered in a Sicilian blood-feud; his second wife killed herself because of his infidelity. As they wait for news of their sons, a bond grows between Lillian and the Prince…
Shuddering to a stop inside the terminus station, the train was greeted by a cacophony of over-amplified announcements on the public-address system and the shouts of porters and people waiting to meet the new arrivals. The last of the horde that had boarded in Milan with much noise and huge quantities of baggage now poured onto the platform. Lillian and her fellow First-Class travellers disembarked more soberly.
‘Thank you very much,’ Lillian said. ‘That will be fine.’ She hoped there wouldn’t be an embarrassing scene when they arrived at her hotel and he tripled his fee. Members of her golf club who’d travelled in Italy had cautioned her against the natives – rogues, they claimed, to the last man and even child.
A currency that dealt in thousands was intimidating. Mistaking Lillian’s hesitation for haggling, he gave a shrug born of long experience. ‘Okay, lady. Seven ’undred fifty. Is ’alf of one pound in your money. Okay?’
A porter, guessing that she was English, addressed her as ‘Lady’ in the voice of a taxi-driver in a New York movie. Lillian gave him the name of her hotel which she had been told was only a short walk from the station.

My thanks to Anne Cater of Random Things Tours for the invitation and place on the tour. Sadly I couldn’t fit this in for a review but I couldn’t resist taking part – especially with a story set in two of my favourite places, Venice and the gorgeous Amalfi Coast. The photo of the author below made me smile because I have my own version of that same view and I know exactly where it was taken. In beautiful Ravello on the Amalfi Coast. As the train rattled onto the causeway with a klaxon roar, Lillian caught her first glimpse in thirty-one years of the spires and domes of Venice shimmering in the midsummer haze above the electric blue lagoon. Most of the buildings on the landward side were utilitarian – warehouses and multi-storey car-parks – but this was still unmistakably a city that floated on the sea, the mere notion of which was exotic to someone whose feet had always been firmly planted on the ground. Lillian felt the return of something she had forgotten from her honeymoon all those years ago: the spell that Italy could cast over a foreigner – a spell which had called like a summons to Andrew, the ‘Prodigal Son’ she was here to track down.