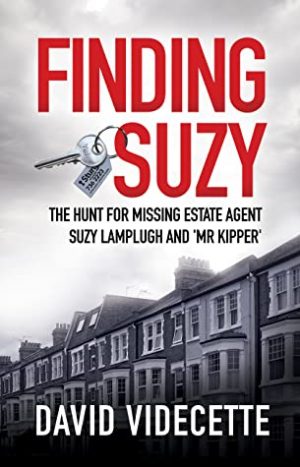 London estate agent Suzy Lamplugh was 25 when she suddenly disappeared on 28 July 1986 whilst at a property appointment with the infamous ‘Mr Kipper’. I was only around a year younger than Suzy at the time and remember this case so well. I can recall her face even now without needing to Google, it was a such high profile news item at the time. The thought that a young woman could just disappear whilst doing her job was too awful. Following her daughter’s disappearance, her mother, Diana Lamplugh became a forceful campaigner for personal safety, setting up the Suzy Lamplugh Trust

How can someone just disappear?Haunted by another missing person case, investigator and former Scotland Yard detective, David Videcette, has spent five years painstakingly reinvestigating Suzy’s cold case disappearance.High-profile searches were conducted, yet Suzy’s body was never found. The trail that might lead investigators to her, long since lost.Step inside a real-life, missing person investigation in this compelling, true crime must-read. Uncover what happened to missing estate agent Suzy Lamplugh, as David Videcette takes you on a quest to unpick her mysterious disappearance and scrutinise the shadowy ‘Mr Kipper’.Sixteen years later, following a second investigation and under pressure from Suzy’s desperate parents, police named convicted rapist and murderer John Cannan as their prime suspect. However, the Crown Prosecution Service refused to charge him, citing a lack of evidence.
MY THOUGHTSThis is an extremely detailed account written with balance and sensitivity, sometimes perhaps more minute detail is included than is strictly necessary but the resulting narrative is thought provoking and fascinating. Whether you remember the case or not, as an insight into investigating a cold case and picking apart previous misconceptions, this is excellent and if it were a fiction book, the reader would be utterly gripped and waiting for the ‘ta-da’ conclusion. Sadly this is a real life story but even so, seeing how the way the police, the media and certain family members were all involved in the various investigations over the years, was a real eye-opener.Through a series of incredible new witness interviews and fresh groundbreaking analysis, he uncovers piece by piece what happened to Suzy and why the case was never solved. People don’t just disappear…
Published by: DNA Books
Format: Ebook and paperback (5 August 2021)
Pages: 310
Source: Kindle Unlimited
The author puts forward a credible and compelling case for coming to his own theory behind Suzy’s disappearance. Whether he is correct or not, it is astounding that the police appear to have closed their eyes to any other possibility other than the one they have fixated on for the past 35 years and seemingly will not investigate any other conclusion. The case has been re-opened more than once but previous information and witness statements seem to have been ignored in favour of following another narrative. This to me is unforgivable and doesn’t help in the search for Suzy or bring any closure to her family. What is so sad is both Suzy’s parents died without ever knowing what happened to their daughter. I do hope that somebody in the police authority with any influence in the investigation reads this book and reconsiders their decision.
Despite the baffling case dominating the news and one of the largest missing persons cases ever mounted, police failed to find a shred of evidence establishing what had happened to her.
As an investigator, David Videcette has worked on a wealth of famous cases. He’s chased numerous dangerous criminals and interviewed thousands of witnesses. With decades of experience working in counter-terror operations and combatting organised crime, David investigated the 7/7 London bombings as a Scotland Yard detective. Today he uses his policing expertise to investigate cold cases in his true crime series: Investigations by David Videcette. He is also the author of the Detective Inspector Jake Flannagan thriller series. David lives in London. When he is not writing, he consults on security operations for high-net-worth individuals and is a key media commentator on crime and policing for broadcasters and newspapers, both nationally and internationally. Find out more at: www.DavidVidecette.com
Ex detective David Videcette has spent years and his own money in carrying out his own investigations into what actually happened that day and what he has discovered shows an apparent flawed police investigation too heavily influenced by other people.
Each chapter begins with a date and a countdown to how many years/months Suzy has been missing and sometimes also includes a timeline reference to other news at the time. Much of the story recalls how David and his colleague Caroline spent years attempting to track down surviving witnesses many of whom had long since moved away or retired, including members of the original police investigation team, often being rebuffed or ignored, asking questions as well as carrying out their own research in an attempt to piece together a true picture of events. Of course, with many witnesses now deceased, this was no easy task. The writing is honest and the author admits that there are there were times when people just didn’t want to speak to him, or he just couldn’t engage with them for some reason.
ABOUT THE BOOK
ABOUT THE AUTHOR