Natalie Normann grew up in a shipping town on the west-coast of Norway and always wanted to be a writer. Actually, she wanted to smoke cigars and drink whiskey like Hemingway but settled for chocolate and the occasional glass of Baileys.
Ninni Toft, his nearest neighbour, has come to the island to mend her broken heart. With her wild spirit and irrepressible enthusiasm, she shows city-boy Jack the simple pleasures of island life – and what it means to belong. To a place. To a people. To one person in particular…
I was pleased to read a book with a setting that is that bit more unusual. Most summer romances seem to be set in Spain, France or Italy so a virtual trip to Summer Island in Norway was a pleasant change. I don’t know much about Norway and I enjoyed finding out about day to day life as well as food and traditions. I am very impressed that this book was written in English and not translated from the author’s native Norwegian. That must have been quite a challenge.
From the back of the book
My thanks to Kelly at Love Books Tours for the invitation to take part in the tour and for providing a ebook copy for review. Summer Island is published by One More Chapter and is available now in paperback and ebook editions. At the time of writing, the Kindle version is just 99p so it’s an ideal time for you to treat yourself to some armchair travel to Norway!
I loved the sense of community among the islanders. In such a small place where everyone pretty much knew everything that was going on, rather than that being intrusive, it seemed supportive with everyone looking out for each other. Ninni had always felt at home on the island and like the other islanders, she is keen to encourage Jack to think of it as a place he can belong too. This isn’t necessarily for the reason you might think though – you’ll need to read the book to find out more!
Summer Island is her first romance written in English.
Her writing journey started with short stories in women’s magazines until her first book was published in 1995.
He never meant to stay.
He certainly never meant to fall in love…
Home is where the heart is, but is Jack’s heart with the career he left behind in London, or on the wind-swept shores of Summer Island, with Ninni?
About the author

When Jack and Ninni meet, it’s not a good start. He has driven the wrong way round a roundabout and knocked her off her bike. Jack has found out that he has been left a farm on Summer Island from the biological father he never met. He has just walked out of his job as a top chef in London following a disagreement with the owner. Summer Island is a place of refuge for Ninni whose relationship has just broken down. She usually lives in Bergen but has always loved visiting the island which is really her second home. Neither is particularly looking for love but you can guess how that might work out!
Summer Island is an easy to read, charming, romantic tale. I already have the author’s next book, Christmas Island, on my Kindle and am looking forward to reading that later in the year and catching up with some of the characters from this book.
Summer Island off the coast of Norway was the place London chef Jack Greene should have been from. He’s an outsider in the community that should have been his family, and now he’s setting foot on the strange land he has inherited for the first time. 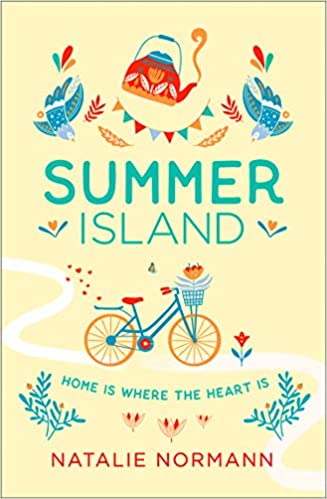