Andy Jones is the author of Girl 99, Four, The Two of Us and The Trouble with Henry and Zoe.  His latest novel, The Last Act of Adam Campbell is published in paperback by Hodder & Stoughton on 29 April 2020.
1. Tell us a little about The Last Act of Adam Campell.
Andy kindly answered a few of my questions.
The honest – and perhaps boring – answer is, nothing. I’ve been asked so many insightful, fun and surprising questions. I guess no one’s ever asked the above question before – it’s a good one, so I’ll go with that.
About the Author
The challenge of putting a play together – and quickly – gives the characters in this book a shared purpose. They make new friends, support each other and find a strength they didn’t know they possessed.
6. If you could only read one book for the rest of your life which book would it be?
This is one way the characters are preparing for and facing their own deaths. Not by retreating from life and waiting for the inevitable, but by embracing a new and ambitious challenge.
In one form or another, Andy has always been a writer. At school, he passed notes in class and scribbled rude words on lampposts. At University, he wrote a PhD in biochemistry and forged tickets to various balls. And as an advertising copywriter, has written commercials for everything from baby food to booze. But it wasn’t until he was well into his thirties that Andy stared writing fiction. If he could write a letter his younger self, it would urge him to stop messing about and get on with it. Andy lives in London with his wife and two little girls. Chances are, he’s writing something. Find Andy on Twitter and Instagram @andyjonesauthor, and Facebook /andyjonesauthor.
A couple of things came together in my mind. I’ve never really ‘got’ Shakespeare. I’d tried Hamlet but found it rather inaccessible. So I’d made a commitment to give Shakes one last go and I was reading Macbeth. Loving it, actually. I finally got what all the fuss was about. At the same time I was thinking about a new novel, but other stuff was happening in my life – like it always does. In a short space of time, I’d lost a friend, an uncle and a cousin to cancer. Also my father and another close friend were diagnosed, so that was obviously in the forefront of my mind. And then, one afternoon, making coffee, all those separate pieces came together in my mind. I knew what the book would be about.
About the Book
No.
3. Are you a plan, plan, plan writer or do you sit down and see where the words take you?
I read a lot, obviously. I go for long walks with my family and out dog, and workout most days. I also train Brazilian Jiu Jitsu – it’s nice, after a hard days writing to go and strangle a friend. Or – more often – get strangled by a friend.
They meet in group therapy and, through various circumstances, decide to put on a play – a kind of mash-up of Shakespeare’s Greatest deaths: Romeo with poison, Hamlet in a duel, the Duke of Clarence drowning in wine, Antigonus perused by a bear.
5. What do you do when you aren’t writing? What do you do to relax and get away from it all?
Despite the devastating news, Adam is determined to turn his life around before it finally runs out. Help comes in the form of an ex-junky, a cantankerous train driver, a nun experiencing a crisis of faith, and a teenager intent on losing her virginity – all living on borrowed time, all desperate to feel alive before their time is up.
People fall in love in this book, they learn and grow, they forgive and are forgiven. And they laugh. A lot.
2. What inspired the book?
The Last Act of Adam Campbell is about a group of terminally patients, none expected to live longer than a year.
I’m a meticulous planner. I wish I wasn’t because it’s hard. And it’s not as much fun as writing. But that’s how it goes for me. I’ve tried writing without a plan and the result was a mess. Much like my cooking when I don’t follow a recipe.
7. I like to end my Q&As with the same question so here we go. During all the Q&As and interviews you’ve done what question have you not been asked that you wish had been asked – and what’s the answer?
A year can go quickly. Particularly when it’s your last.

Adam had a good life: a job he enjoyed, a nice house, a loving partner and a bright six-year-old daughter. Then he cheated on his partner. Then she kicked him out of their home. And then he was given approximately twelve months to live.
Ah, don’t do that to me. How dare you! God – the thought of it is giving me anxiety. I’m looking for a loophole – like an anthology of stories. Or a collected series. Gun to the head: Midnight’s Children. 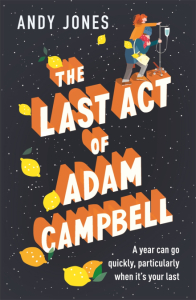 4. Is there still anything about the process of publishing a book that surprises you?