Heather Martin explores Child’s lifelong fascination with America, and shows how the Reacher novels fed and fuelled this obsession, shedding light on the opaque process of publishing a novel along the way. Drawing on her conversations and correspondence with Child over a number of years, as well as interviews with his friends, teachers and colleagues, she forensically pieces together his life, traversing back through the generations to Northern Ireland and County Durham, and following the trajectory of his extraordinary career via New York and Hollywood until the climactic moment when, in 2020, having written a continuous series of twenty-four books, he finally breaks free of his fictional creation.
To be honest it’s the other way round for me. I write not to relax, perhaps, because it’s hard enough work, but definitely to get away from it all. That’s a big part of the attraction: the way writing is so totally absorbing, the way it fully engages me both intellectually and emotionally. Which probably also explains why I was so certain that I was ready to embark on an epic project such as a biography. Otherwise, the usual things: reading, listening to music, going for walks, hanging out with family. The biggest highs are when I get to see my two sons play live with their band, Lunch Money Life.
The Reacher Guy is a compelling and authoritative portrait of the artist as a young man, refracted through the life of his fictional avatar, Jack Reacher. Through parallels drawn between Child and his literary creation, it tells the story of how a boy from Birmingham with a ferocious appetite for reading grew up to become a high-flying TV executive, before coming full circle and establishing himself as the strongest brand in publishing. 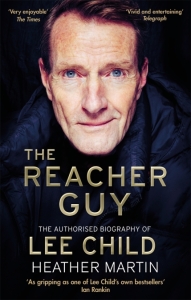 Well, no one has yet asked to make a biopic of The Reacher Guy, and the answer is yes, but do you have an actor tall enough to play Lee Child? And since my book is one that Lee could never write a quote for, the question: What was Lee Child’s response when he read the first ten chapters of The Reacher Guy? To which the answer is, he wrote me an email, which read simply: ‘Terrific. Lovely, and exquisite.’ That was enough for me to keep writing.
I like to see where the words take me. I trust in that process to work. If it doesn’t, I feel it’s because there’s nothing I really want to say. I might have a sense of an ending, but the prospect of planning out an entire biography would have been too daunting, perhaps even paralysing, with a risk of imposing a purely conceptual structure on something that I wanted to flow of its own accord. In fact, I didn’t really think in terms of biography, with its legacy of conventions; rather I set out simply to tell my story of Lee’s life – and out of respect for my subject it was important to me that it should, if possible, read like a story. My strategy was to rely on a single idea, or image, or moment or phrase, to steer me through each chapter and on to the next. And when it came to the editing phase, I was happy to prune and refine and smooth and simplify, but I made very few changes to the order of things. I think Lee’s somewhat cryptic assertion that a book has to have ‘a beating heart’ spoke to me quite strongly.
I know a lot about how publishing works for Lee Child, but that’s a whole other story.
Heather kindly answered a few of my questions.
About the Book
7. I like to end my Q&As with the same question so here we go. During all the Q&As and interviews you’ve done what question have you not been asked that you wish had been asked – and what’s the answer?
Well, it has to be someone’s collected works, and it has to be the Argentine poet, essayist and short story writer Jorge Luis Borges, if only for just three of his stories and a mere thirty pages of text … ‘Funes the Memorious’, about a guy who remembers everything he’s ever seen, down to the last leaf on every tree, the last tendril on every vine, and the last grain of sand on the beach; ‘The Aleph’, about a five-centimetre sphere that somehow encompasses ‘the inconceivable universe’ in its entirety, without diminution of size; and ‘The Library of Babel’, which contains every book ever written and not yet written, so presumably even The Reacher Guy. That lot would keep me busy for a while.
Heather Martin is the author of The Reacher Guy: The Authorised Biography of Lee Child, which was published by Constable on 21 October 2021.
Everything. On a personal level it was all new to me, and most of it happened during some form of lockdown, which in itself was alienating, so overall I’d say it was a lonely experience, and far harder than the actual writing. I barely had a chance to get to know my publishing team. I spent publication day on my own. Lee and I had four big events planned: at Coventry Cathedral with Kenilworth Books, the Sheldonian Theatre in Oxford, with Blackwell’s, and the University of East Anglia and City University New York, as well as a fabulous launch party at the Groucho Club, and none of those things happened. Instead we went online, which was not my natural habitat, though I’ve grown accustomed to it since. But that brought its own blessings, not least among them the warmth and generosity of readers and bloggers.
4. Is there anything about the process of publishing a book that surprised you?
Jack Reacher is only the second of Jim Grant’s great fictional characters: the first is Lee Child himself. Heather Martin’s biography tells the story of all three.

Lee Child is the enigmatic powerhouse behind the bestselling Jack Reacher novels. With millions of devoted fans across the globe, and over a hundred million copies of his books sold in more than forty languages, he is that rarity, a writer who is lauded by critics and revered by readers. And yet curiously little has been written about the man himself.
I’m tempted to say, because I had the idea to write a book about Lee Child and saw that idea through. But the history of it runs more or less as follows: I’d read the Reacher books, without giving any thought to their author, exactly as Lee Child would wish. Then one day I met the guy who wrote them at a dinner party in New York, only to discover that he himself was a fictional character, the invention of one James Dover Grant, commonly known as Jim. We talked about books and writing and everything under the sun, and afterwards stayed in touch. I started going to his events. I realised that fans were increasingly interested in the backstage guy, who had morphed into something of a superstar, and it struck me that someone had to write his biography one day and it might as well be me. So it was an organic thing, growing out of an extended conversation, but there came a point when we both accepted it was happening.
1. Tell us a little about The Reacher Guy.
‘The Reacher Guy’ is what I called my biography of Lee Child. I chose that title because that’s how he would always refer to himself at public events when someone asked if he would ever write a standalone or a series about a different character. ‘That would just be weird,’ was his typical response. Like turning up to watch Messi play football only to find him playing basketball instead. ‘I’m the guy who writes the Reacher books,’ he’d say: ‘I’m the Reacher Guy.’ It was a gift, really.
5. What do you do when you aren’t writing? What do you do to relax and get away from it all?
6. If you could only read one book for the rest of your life which book would it be?
2. How did you come to write a book about Lee Child?
The anonymity of it reflects his view that the author remains subordinate to his work, and subordinate to the characters he creates. The writer is the backstage guy, which is what Jim Grant always was in his theatre days. It’s Reacher who takes the limelight.
3. Are you a plan, plan, plan writer or do you sit down and see where the words take you?