6. If you could only read one book for the rest of your life which book would it be?
Cat is a Southernised Northerner from Scarborough, North Yorkshire. She is a grown up eternal student, with a passion for travel which has seen her wandering the globe in search of ‘truth’. She has travelled extensively throughout Europe and South East Asia, and spent time living in Ireland, France, and Australia. The Scoop is her debut novel. In her spare time she writes fiction and poetry and once co-wrote and directed the world’s first lesbian field hockey musical, ‘Honeybees: The
3. Are you a plan, plan, plan writer or do you sit down and see where the words take you?
I play dinosaurs and cars and super-heroes with my little boy. I should probably be teaching him the alphabet and counting but that’s way less fun. I actually find writing relaxing though, and wish I could do more of it, but looking after a toddler is a full time occupation (and I also have a full time occupation).
Cat kindly answered a few of my questions.
Musical’, which sold out performances in Brighton, Eastbourne and the famous RADA Studios (formerly the Drill Hall) off the West End of London. During lockdown Cat unexpectedly became a bestselling poet when she was published in ‘Poems for a Pandemic’ (HarperCollins) alongside Darren Smith’s powerful ‘You Clap for Me Now’. Cat Walker is not having a mid-life crisis!
1. Tell us a little about The Scoop.
Casey Jones’s life is a mess. Her job bores her, her parents confuse her, and she has repeated nightmares about her ex-girlfriend. In a moment of madness she packs in her job and plans an adventure with her schoolfriend, long-time lad Danny. What she didn’t plan for was an extra passenger, in the shape of Danny’s estranged twelve-year-old son, Ari who has troubles of his own. 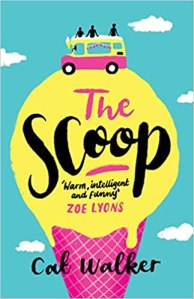 2. What inspired the book?
“Who would you most like to read your book?” I have an eclectic list, with people like Ellen Degeneres and Sue Perkins on it. Barack Obama is on there too, and The Queen. But honestly, the one person that I most wish could read it would be my Dad. He passed away just before Christmas with Covid complications of his Parkinson’s and dementia. I’m not 100% sure that he knew my debut novel had, at last, been published in 2020, but I’m pretty sure that he would have loved it. He was a keen traveller and an intellectual. I would have loved to have seen the pride in his eyes when he finished it.
7. I like to end my Q&As with the same question so here we go. During all the Q&As and interviews you’ve done what question have you not been asked that you wish had been asked – and what’s the answer?
About Cat Walker
The three of them are thrown together for an intense rollercoaster ride in Alice – a converted bright pink ice cream van – through some of the most beautiful and dangerous places in the world, from Tulse Hill to Tibet.
5. What do you do when you aren’t writing? What do you do to relax and get away from it all?
Cat Walker’s novel, The Scoop, was published by Red Door Press on 19 March 2020.
4. Having been through the publishing process, is there anything about the process of creating a novel that surprised you?
About the Book
Wow, that’s a difficult question. (*Goes to search the bookshelves for inspiration*). (*Looks at what other writers have said*). (*Makes cup of tea*). OK, I’ve got it. I think I’m going to plump for the complete works of James Joyce – not because I’m being pretentious (well, maybe just a little bit) but because I think that it could keep one occupied for a lifetime trying to fathom it out. Or maybe it would just drive me mad because it doesn’t make sense. Either way if I’ve only got one book then I’ll go mad anyway.
The Scoop is essentially the story of hapless thirty-something Casey Jones. Or maybe it’s about all of us. Casey wakes up one day to the realisation that her life is going nowhere and she’s not getting any younger. She thinks that travelling might lead to the answers she desperately seeks, and allow her to heal old wounds. So she sets off on a partially-planned journey, in a bright pink ice cream van, with her old friend Danny and, unexpectedly, his young son, Ari. But the trip doesn’t exactly go as planned. On one level this is the story of three very different travellers finding themselves on an adventurous romp through Europe and Asia. On another level, the book tackles some of life’s thornier little mysteries, like how to live a good and meaningful life. The Scoop was longlisted for The Guardian’s Not The Booker Prize 2020.
I had a sort of whole idea in my head when I started writing, in that I knew the (vague) route the characters would take and what issues I wanted to tackle in the book. But I don’t like to lose the spontaneity that comes with just sitting down and letting the characters speak for themselves and take you on a journey as a writer. That definitely happened with The Scoop – the characters took on a life of their own. I kind of had them all down as ‘supporting cast’ but they all wanted the limelight!
The book came about as a result of my obsessive musing on the meaning of life and wondering what on earth we’re all meant to be doing. I’d always wanted to write about this, but the idea always seemed so dry and boring, so when I went travelling myself and started to write about my adventures I finally found the perfect vehicle (excuse the pun) for the job. Actually the ice cream van (called Alice in the book) was a late addition, purely on a whim, but it gave me a decent title for the book which had eluded me for so long. For years it had the working title of ‘Camperzen’ which is just awful on so many levels! (Isn’t it? Or did I make a terrible mistake?)
I knew that this story was always going to be hard to categorise and put in a genre, but I hadn’t realised how hard that would make it to market. Publishers and bookshops really love a category. The Scoop was picked up because my publishers saw it as hitting the current trend for ‘Uplit’ (‘Uplifting Literature’ – yes, I had to Google it too); so everything from the cover to the blurb to the marketing pitches were based on The Scoop being ‘light-hearted’ and ‘uplifting’ and ‘fun’. Now I’m not saying it’s not a funny book (at least I hope it is), but it does also cover things like the holocaust and gay martyrdom and the Bosnian and Kosovo wars!