About the Book
One dead body, two badly injured operatives and five crates of hijacked rifles.
In Rome, former French special forces intelligence analyst Mélisende des Pittones is frustrated by obnoxious local cops and ruthless thugs. Despite the backing of the powerful European Investigation and Regulation Service, her case is going nowhere. Then an unknown woman tries to blow her head off.
Today I have an extract to share.
She’s hunting arms smugglers. But who is hunting her?
‘Please use your EIRS cards to pass through.’ Two peeps and a green light for both Mel and Andreas. Giordano opened the next door and they entered a meeting room complete with polished table and uncomfortable-looking chairs.
Double Pursuit by Alison Morton was published on 16 October 2021.
The police building on the Quirinal Hill stretched up in front of them from a ground floor of grey masonry blocks to the upper three floors covered in red stucco. No window boxes of scarlet geraniums. Inside, the carabiniere radioed through their names and a few minutes later a man in a light grey suit entered the lobby. 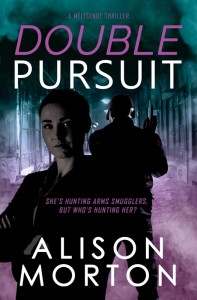 As Mel and fellow investigator Jeff McCracken attempt to get a grip on the criminal network as well as on their own unpredictable relationship, all roads point to the place she dreads – the arid and remote African Sahel – where she was once betrayed and nearly died. Can Mel conquer her fear as she races to smash the network and save her colleague’s life?
‘I don’t know how you can bear to wear longs in this,’ Mel said and waved her hand towards the brilliant blue sky.
After a breakfast of cappuccino and over-sweet cornetti served by a smiling but silent mamma hovering round them in the shaded courtyard behind the pensione, Mel and Andreas set off in the glaring sunshine.
‘Buongiorno,’ he said, his face solemn. His black, slicked-back hair and slender frame gave him a youthful look, and he radiated fitness in his stride. But Mel saw wrinkles at the outside edges of his eyes and some grey hair at his temples. A fit operative, experienced but still actively in the game, but not as an ordinary policeman. She glanced at Andreas who gave her the briefest of nods in return.
‘I am Captain Giordano,’ the man said. ‘Your ID, please.’
Mel smoothed her hand down the skirt of her linen sleeveless sundress and prodded the bridge of her sunglasses. She’d piled her fair hair up into a pleat to keep her neck and shoulders cool.
‘Now,’ he said, fixing them with a hard stare, ‘Investigator des Pittones and Kriminalkommissar Holzmann, please tell me why two officers from the European Investigation and Regulation Service are sneaking around Rome under false names and without the courtesy of at least informing us.’
He took their EIRS warrant cards, studied them, turned them over then handed them back without a comment. He gestured them to follow him and set off down a corridor, obviously confident they would follow him. At a security arch, he flashed a plastic card across a reader pad.
‘Well, I’m certainly not putting a suit on for a day like this.’
‘Do you ever?’ Andreas smiled at her.
‘Well, I don’t want to look like a tourist when we meet our Italian colleagues this time,’ Andreas said.
‘Ha!’ True, she was a jeans and shirt type or until recently, combats. But this morning her practical side had led her to choose thick-soled canvas shoes for Rome’s hard pavements.