I plan, plan, plan so that the words can take me to the places that make sense. To be honest, I’m still experimenting with how much to plan before diving in. With Asking, I didn’t plan enough so had a lot of repair work to do after. With Tough Crowd, my latest book, I over-planned which lead to the first draft being very long – so I still have a lot of repair work to do. No escaping the sizeable task of editing, I guess.
5. What do you do when you aren’t writing? What do you do to relax and get away from it all?
Probably Big Magic by Elizabeth Gilbert. It’s not just inspiring from a creative perspective but for life. Alternatively, I’d read the dictionary. Each word is it’s own story!
I’ve just got a puppy which is taking up all my spare time. Though, in theory, I knew what a big commitment it was going to be, now I’m in it, it’s like, wow, people weren’t lying when they described how full on it is.
Andi kindly answered a few of my questions.
Forty-something Jemima’s life is on track – well, sort of, she just need to bat her niggly ex away for good.
Having come from the world of film and television, probably the biggest culture shock was the pace at which things happen. In TV it can be very now, now, now! I once auditioned for a series regular and if I’d got the job I would have had to start the following Monday. Publishing definitely doesn’t have that urgency so it took me a while to adjust to that. I’d worry that things had been forgotten about but it was just that they were on a low simmer until the time was right.
Three best friends are going to solve their relationship woes once and for all
Andi Osho’s debut novel, Asking for a Friend, was published by HQ on 4 February 2021.
Asking For A Friend is about three girlfriends who are having no luck in their love lives so they decide to ditch the dating apps and go out IRL and ask guys out… but for each other. Needless to say, things don’t quite go to plan.
3. Are you a plan, plan, plan writer or do you sit down and see where the words take you?
7. I like to end my Q&As with the same question so here we go. During all the Q&As and interviews you’ve done what question have you not been asked that you wish had been asked – and what’s the answer?
Having no luck in my own love life! But also I wanted to take some of the relationships wisdom that had been passed on to me and put it into story form. Also, by the time I cam to writing the book, I’d stopped doing stand up but the funny needed a place to go. The novel felt like the perfect outlet.
2. What inspired the book?
In normal times though, since moving into the literary world I have rediscovered a love of novels (I was reading a lot of non-fiction) but I also love film. Awards season can a really exciting time, especially when those little indie gems get to have their day in the sun.
While thirty-something Simi has had more it’s not yous than any I dos.
Twenty-something Meagan is in the midst of her five-phase plan and is nearly ready for phase three: a relationship.
6. If you could only read one book for the rest of your life which book would it be? 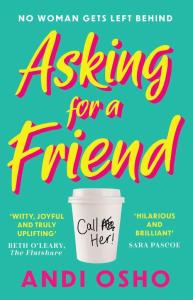 About the Book
These best friends decide it’s time to ditch the dating apps and play the love game by their own rules. They’re going to ask people out in real life…but only for each other. What could possibly go wrong?
1. Tell us a little about Asking for a Friend.
4. Is there anything about the process of publishing a book that surprised you?
Honestly, I think people pretty much have the measure of me when I’m interviewed. The question I’m asked that I’m never really sure about is, whether I was funny as a kid. Of course, I think I was, but who knows if that’s the truth. I remember being an energetic goofball but I’m not sure my humour was quite as sophisticated back then as I tell myself it was.