The characters all have flaws. No one is depicted as perfect, least of all Ivy. Her impetuousness of the past has led her to miss the potential happiness in her life, leading her to have to confront more than the secrets she has kept hidden. Old Tremain is bitter, angry and violent, Edward suffering and keeping secrets of his own. Each character has their place in the story, each one impacting on what happened in 30 years ago.
An atmospheric, almost gothic tale of intrigue, secrets and the revelation of truths.
Publication date – 13 January 2022
‘I still dream, every night, of Polneath on fire…’
The story is slow paced, but that is not meant to imply it is in any way lacking. There are revelations from near the beginning, with events occurring to draw the reader into the story. It merely means that this is not a fast action novel, it is one where the story is layered upon itself and slowly the truth emerges. It flows well, and there is never a point where the narrative flags.
By day, Ivy Boscawen mourns the loss of her son Tim in the Great War. But by night she mourns another boy – one whose death decades ago haunts her still.
Published by Viking Books
Ivy Boscawen’s son, Tim, has died during the Great War. As Ivy struggles to come to terms with her child’s death she recalls the death of another, 30 years earlier.  Ivy is forced to confront a fire at Polneath house and the devastating consequences of it, events that have followed her in life since.
Source – review copy
There are reflections on society, on class and how “higher-ranking” members of society could get away with far more, due to class and the automatic privileges it brought. The role of women in society, of those in service, is dwelt upon. It is also, at it’s heart, a story about actions and consequences, and the repercussions that spread out as a result. 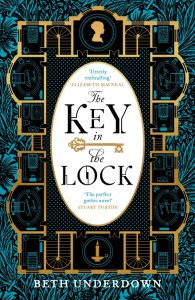 The story moves between 1888 and 1918 as Ivy looks at how her actions 30 years ago have had ramifications throughout her life. She is struggling to come to terms with the death of her only child, and the impact his loss has had on her relationship with her husband, Richard. The style of switching between time frames works well. The story flows and doesn’t feel like it is either held up, waiting for a reflection from the past, or out of kilter with the present.
For Ivy is sure that there is more to what happened all those years ago: the fire at the Great House, and the terrible events that came after. A truth she must uncover, if she is ever to be free.
Told from the viewpoint of Ivy, the reader sees only what she does, and knows only what she wants us to know. The naivety of her youth, her infatuation with Edward Tremain, her dislike of other characters all affect the story that she is recalling.