Source – review copy
Mina is a product of her family’s tragedy. Almost forgotten by her mother on her quest to find out what happened to Evelyn, Mina has grown up in the shadow of her sister’s disappearance. She has watched her father retreat into himself and her mother tour talk shows and media outlets, write books and endlessly discuss when Evie McCreery vanished. Even after her mother’s death she controls the investigation, offering a million dollar reward for information leading to a conviction.  Mina is tired of it all. She has retreated herself, staying mostly in the family farm. working frpm home and only venturing out when she has to. It’s on one of those excursions she meets Lane. Mina is used to people trying to build her hopes up so knocks him back when he says he can help. But he wins her over in an unexpected way.
Mina is still wary of Lane, so used is she to keeping people at arm’s length. As Lane investigates Mina reflects more on what happened the night Evelyn disappeared and more begins to emerge. 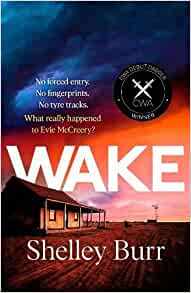 EVERYBODY THINKS THEY KNOW MINA McCREERY.
EVERYONE HAS A THEORY ON WHAT HAPPENED TO HER SISTER.
NOW IT’S TIME TO FIND OUT THE TRUTH…

Mina McCreery’s sister Evelyn disappeared nineteen years ago. Her life has been defined by the intense public interest in the case. Now an anxious and reclusive adult, she lives alone on her family’s destocked sheep farm.
Published by Hodder & Stoughton
Lane wins her trust when his unconventional methods show promise, but he has his own motivations for wanting to solve the case, and his obsession with the answer will ultimately risk both their lives.
Whilst there are no big scenes or high action parts none of the story drags. The story is intriguing and pulls the reader along. There is a sense of intrigue and a suspicion that all is not as it seems throughout.
Recommended.
I thoroughly enjoyed this debut, an entertaining, dark and considered mystery that transports the reader to the Australian bush. I look forward to reading more by Shelley Burr in the future.
The setting is fantastic and just as much a part of the story as the characters that inhabit it. Despite being vast, the endless countryside, the lack of neighbours for miles, there is a closed room feel to the book. There are limited reasons as to how and why Evelyn McCreery vanished. Secrets has been kept for nearly 20 years. By the people who knew her, by Lane, by Mina and also by the land that surrounds them all.
Lane has his own reasons for wanting to investigate and they are mainly personal. He needs the reward. He is the sole carer for his sister and feels responsible for her, he insists on paying for her university fees, accommodation and the like, though at times he sleeps in his car due to lack of money. His was a troubled childhood. His mother is now dead and his father in prison. It is that background that drives him, almost to the brink.
When Lane, a private investigator, approaches her with an offer to reinvestigate the case, she rejects him. The attention has had nothing but negative consequences for her and her family, and never brought them closer to an answer.
Publication date – 9 June 2022
Mina McCreery has lived with the disappearance of her sister Evelyn since she was nine years old. It has shaped her life, became the focus of her mother’s and left her living alone on the family farm whilst her father travels to escape the reality. When a private investigator, Lane, arrives offering to investigate she angrily sends him away. But he persists and begins to win her over. But Lane has his own reasons for investigating and the truth may put them both at risk.