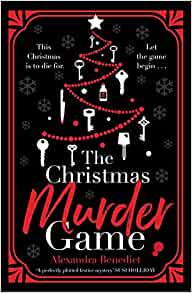 Published by Zaffre
Lily has no desire to win the house. But her aunt makes one more promise: The clues will also reveal who really killed Lily’s mother all those years ago.
Twelve clues.
Twelve keys.
Twelve days of Christmas.
But who will survive until Twelfth Night?
Isolated country house? Limited number of guests who all have secrets to hide? Snowed in and trapped with a possible murderer? Yes please. All the ingredients for a great locked in murder mystery are present in The Christmas Murder Game and I wasn’t disappointed.
I did guess the denouement before it was revealed but I had great fun along the way. The writing is engaging and holds the reader’s attention. Each day is clearly marked out in the chapters and each day brings it’s own clue to solve. It’s obvious from the narrative that the author loves crime novels and had fun in creating her own puzzle. I for one had fun reading it.
No country house is complete without a morose housekeeper and Mrs Castle fits the bill. There seemingly under duress, she dishes out the clues every day, together with feasts fit for kings.
The mystery itself is engaging. When the first body appears the game kicks up a notch. Is someone so keen to get the house they are willing to kill the others? Is it someone from the outside, who has made it through the snow to pick off the guests? With no mobile phones and no way to get to the outside world, Lily and her cousins are trapped together.
Source – review copy
Puzzles lay at the heart of The Christmas Murder Game. Each clue to that day’s key is found in a sonnet written by Liliana. There are anagrams of the twelve days of Christmas and mention of twelve country house mysteries dotted about the story. Even the acknowledgments are a word search.
A fun, immersive, entertaining whodunit and a great addition to the country house mystery genre. I look forward to reading more from Alexandra Benedict in the future.
Lily hasn’t returned to Endgame House since she was a child. The memory of finding her mother dead in the Maze in the grounds of the house still haunt her. So when her aunt dies, and requests she returns to take part in the annual Christmas game she is reluctant. This time though, the hunt isn’t for Christmas presents. The prize will be the house. Lily doesn’t want to win, but her aunt offers her a better prize. The chance to find out the truth about her mother’s death. So Lily travels to Yorkshire and to her past. Surrounded by family, all with secrets to hide, will Lily found out the truth? And with a killer on the loose, will she survive the twelve days of Christmas?
This Christmas is to die for . . . Let the game begin
Publication date – 30 September 2021
As a snowstorm cuts them off from the village, the game turns deadly. Soon Lily realises that she is no longer fighting for an inheritance, but for her life.
There are some awful characters. Liliana, though dead, is not depicted as a kindly aunt. She is cruel, a cold woman who didn’t show love to her children, resulting in Gray being closed off and quiet, and Sara to be mean spirited and nasty. Sara is spiteful, controlling of her brother and derogatory about everyone else. Then there are the other cousins. Tom, who constantly makes puns and tries to make people laugh, his brother Ronnie, who Lily adores. His wife Philippa, seems a little more controlling. Finally there are Rachel and her wife Holly, there to try to win the house and secure their future.
So, for the twelve days of Christmas, Lily must stay at Endgame House with her estranged cousins and unravel the riddles that hold the key not just to the family home, but to its darkest secrets. However, it soon becomes clear that her cousins all have their own reasons for wanting to win the house – and not all of them are playing fair.
Lily Armitage never intended to return to Endgame House – the grand family home where her mother died twenty-one Christmases ago. Until she receives a letter from her aunt, asking her to return to take part in an annual tradition: the Christmas Game. The challenge? Solve twelve clues, to find twelve keys. The prize? The deeds to the manor house.
Recommended.