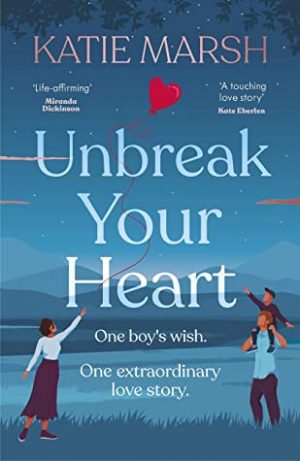 Katie had a ten-year healthcare career before leaving to write full-time. She lives in the English countryside with her family, and her novels include the 2018 World Book Night pick ‘My Everything’ and the Kindle bestseller ‘A Life Without You.’ She loves strong coffee, the promise of a blank page and stealing her husband’s toast. She is currently writing her sixth novel.
But Jake is determined his plan will succeed – and what unfolds will change all three of them forever.
Jake was such a fabulous character. He didn’t want his illness to define him. He was funny, loved Lego, football and more than anything wanted to be like other kids running around. The letters he writes to his friend Emily will break your heart.
Beth’s initial first impression isn’t a good one when she almost knocks Jake off his bike. She has relocated to the Lake District from New York to escape her own personal heartache and anything else other than getting on with her new job is far from her mind.
Single dad Simon still holds a candle for the woman who left him years ago. Every day is a struggle to earn a living while caring for his beloved son. He has no time for finding someone new.

This was one of those books that once I started reading I didn’t want to stop. It was beautifully written and there were parts that were so emotional, particularly where Jake was concerned. All the characters were wonderfully drawn with personalities that felt authentic – none were perfect. Neither Simon or Beth had had an easy time in the past for different reasons, that was clear, and in Beth’s case there was something more that haunted her which was to be revealed. Having the story told from their respective views gave greater insight into their feelings – I really felt for both of them as their back stories were revealed and I was so desperate for them to find the happiness they deserved, whoever that was with.
Beth is determined to forget the past. But even when she leaves New York to start afresh in a Lake District village, she can’t shake the secrets that haunt her.
Told over the four seasons and by alternative chapters of Simon and Beth, it focuses on the story of Jake, a young boy with a life limiting heart condition. Jake has put up with years of hospital appointments and operations supported by his father Simon, a lonely and struggling single dad but still needs one more operation- one which he may or may not survive. Jake is on a mission. He wants his dad to find love again and the lengths he will go to to find a girlfriend for him are both entertaining for the reader and utterly mortifying for Simon.
My thanks to Emma of Hodder & Stoughton for sending a surprise copy of Unbreak Your Heart and to Niamh for the invitation to the blog tour. As soon as I read the accompanying notes, I knew this was going to be one special book.
Publisher: Hodder & Stoughton
Format: Ebook, Audio and Paperback (27 May 2021)
Page Count: 426
Source: Copy received for review
There is so much more which I won’t reveal here – all I will say is I loved the way the story slowly developed between the three main characters, and alongside this, Simon’s troubled relationship with his own father. This is more than just a romance – there are many difficult subjects included along the way but overall it’s a story of love between fathers and sons, and is such an uplifting read that no-one can fail to be affected by it. A gorgeous book. I loved it.

Seven-year-old Jake’s heart is failing and he doesn’t want to leave his dad, Simon, alone. So he makes a decision: to find Simon someone to love before he goes.