Lena’s character is mixed race and the issue of racial prejudice comes through clearly in this story in its different forms. Although Lena can pass as European, it was pointed out to her that she may not find employment as easy to find in the US with their differing prejudices if people know her ethnic background. With Lena struggling to fit into either side of the racial divide, she is glad to find a friend on board, albeit in the lower boarding class – she will certainly need someone on her side. 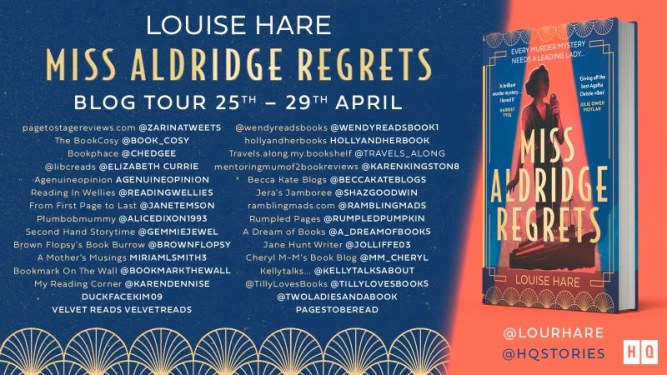 As a character, Lena was savvy enough, her life in the club had hardened her although there was still a vulnerability about her. Through her first person narrative, readers were privy to her thoughts about her life in London and the events that forced her hand, her worries about Maggie and in particular the dangerous situation she found herself in onboard.Crime and cruise ships will always be a win for me and Miss Aldridge Regrets particularly appealed as I have cruised on the current Cunard Queen Mary and it is a beautiful ship. This story of murder, racial identity, prejudice and the seedy side of London clubland was one that I was really looking forward to and I wasn’t disappointed. With a dual timeline and a backstory set in London’s Soho, the setting of the Queen Mary liner is an excellent choice, there is that ‘locked room’ vibe of a ship where there is no escape, together with the glamour and sophistication of the first class passenger lifestyle enjoyed by those rich enough.London, 1936Overall, this is one to recommend. Louise Hare writes so well and draws her characters superbly. The plot makes for an intriguing and suspenseful read and one that I’m sure will be enjoyed by fans of historical and crime fiction. My thanks to HQ for the tour invite and for the copy to review.
After a murder at the club, the timing couldn’t be better and Lena jumps at the chance to escape England. Until death follows her onto the ship and she realises that her greatest performance has already begun.
ABOUT THE AUTHOR
I very much enjoyed the historical feel and the crime element of this, the plot of which wouldn’t have been out of place in an Agatha Christie story. The reveal certainly took me unaware, and although I have mixed feelings about its plausibility there was enough misdirection and surprise throughout to keep my imagination in overdrive.
Lena Aldridge is wondering if life has passed her by. The dazzling theatre career she hoped for hasn’t worked out. Instead, she’s stuck singing in a sticky-floored basement club in Soho and her married lover has just left her. She has nothing to look forward to until a stranger offers her the chance of a lifetime: a starring role on Broadway and a first-class ticket on the Queen Mary bound for New York.
Miss Aldridge Regrets is the exquisite new novel from Louise Hare. A brilliant murder mystery, it also explores class, race and pre-WWII politics, and will leave readers reeling from the beauty and power of it.
MURDER
Travelling in luxury doesn’t come naturally to club singer and aspiring actress Lena Alridge of whom it was said ….”you sang like an angel with a twenty-a-day habit”. The job opportunity of a lifetime has been offered to her out of the blue and it couldn’t have come at a better time. Her beloved father Alfie has died and she really is alone, apart from her best friend Maggie who has her own troubles. Travelling first class on the Queen Mary at someone else’s expense, Lena sees how the other half live however this will not be the relaxing peaceful voyage that she envisaged. 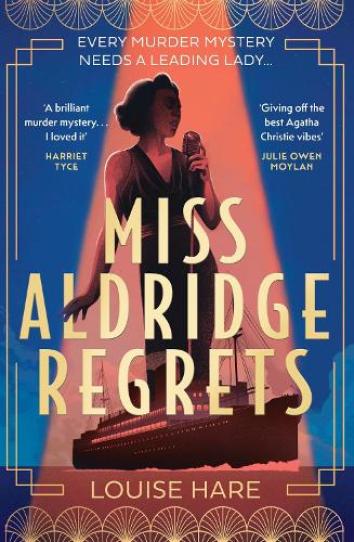