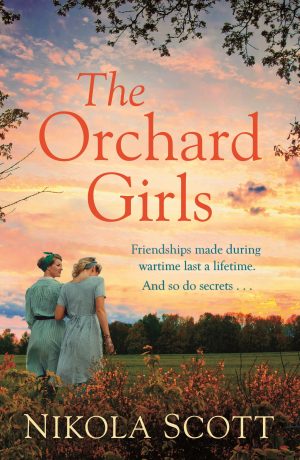 ABOUT THE AUTHOR Her first two books, My Mother’s Shadow and Summer of Secrets, have both been international bestsellers and were translated widely around the world. Nikola lives in Frankfurt with her husband and two boys (and a kitchen table).
MY THOUGHTS
Somerset, 1940
When seventeen-year-old Violet’s life is ripped apart by the London Blitz, she runs away to join the Women’s Land Army. She wants nothing more than to leave her grief behind. But as well as the terror of enemy air raids, the land girls at Winterbourne Orchards face a powerful enemy closer to home. One terrible night, their courage will be put to the test – and the truth of what happened must be kept hidden, for ever . . .
Nikola Scott started out in book publishing and worked as a crime fiction editor in America and England for many years. Turning her back on blood-spattered paperback covers and dead bodies found in woods, she sat down at her kitchen table one day to start her first novel — and hasn’t stopped writing since. Obsessed with history and family stories (‘How exactly did you feel when your parents gave the house to your brother?’) she is well-known – and feared – for digging up dark secrets at dinner parties and turning them into novels.
The two timelines are seamlessly woven together but of the two main characters Violet was my favourite. Her time with the WLA certainly gave her strength of character from the unworldly young girl that first joined up, whereas in contrast I found Frankie less able to stand up for herself and suffering with her own confidence issues. I really hoped that she wasn’t going to throw Violet under a bus for the sake of a story even if her job was under threat. I did feel sorry for her, as she wasn’t given an easy time by her colleagues but I did hope that she would just stand up to her awful boss and say No.
My thanks to Rachel at Rachel’s Random Resources for the place on the tour. Having read and enjoyed Nikola’s books before, both reviewed here on the blog, My Mother’s Shadow in 2017 and Summer of Secrets in 2018, it has been a long wait for a new book but worth it. The Orchard Girls doesn’t disappoint.
Beginning in 1940’s London during the blitz, young, and rather naive debutante Violet Etherington makes a decision that will have devastating consequences and is one that she will never forget. Trying to escape her overbearing mother and to feel as though she is doing something worthwhile, she signs up to join the Women’s Land Army as Lily Burns. The work and living conditions are hard, and they face hostility from the village. Even in the country, they can’t escape the war, and before their time at Winterborne Orchard in Somerset is at an end, Violet and her WLA friends will be the holders of a terrible secret.

Told over two timelines, by Violet and her granddaughter Frankie, the story of Violet’s past is gradually revealed, and what a tumultuous one it is. In the present day, newspaper journalist Frankie O’Brien has been rumbled as Violet’s granddaughter by her editor and has the unenviable task of being under extreme pressure to get a story from her by now, reclusive elderly grandmother, who is rather well known for her campaigning career. However it is clear that Violet’s state of mind is not up to dealing with her past and Frankie also has to come to terms with her own troubled relationship with Violet.

Once a month, Nikola sends out a popular newsletter about writing, reading, book news, freebies and loads of therapeutic baking. Join in here if you’d love to be a part of it all: bit.ly/NikolaScottNews
London, 2004
Frankie didn’t always have it easy. Growing up motherless, she was raised by her grandmother, who loved her – and betrayed her. For years, the rift between them seemed irreparable. But when their paths suddenly cross again, Frankie is shocked to realise that her grandmother is slowly losing control of her memory. There is a darkness in her past that won’t stay buried – secrets going back to wartime that may have a devastating effect on Frankie’s own life.
Publisher: Headline Review
Format: Ebook, audio (1 July 2021) | Paperback (2 September 2021)
Pages: 383/480
Source: Copy received via Netgalley for review The Orchard Girls is a sweeping story with depth and a little darkness that I found totally engrossing. Violet and her Land Army friends were the stars of the show for me and the research required to tell their story clearly shows through – it was clear that being a Land Army worker was no easy choice with challenging working conditions! There are many themes covered, some troubling – including dementia, however they are done with sensitivity. As ever, Nikola Scott writes superbly with characters so beautifully drawn and a vivid sense of place. I thoroughly enjoyed it.