It’s easy to forget that the words being read aren’t fiction but rather were happening. There is a sense of immediacy and also detachment at the same time, no doubt a feeling akin to that which people felt when they saw bombs landing close to home but yet saw and heard of the death of soldiers from gossip or glossier images promoted from the war office.
Published by Handheld Press
It is 1941 and Britain is at war. At home, the people are adapting to living life in constant anticipation. The bombs are coming ever closer and those than can are evacuating to the countryside. Author Margaret Kennedy is one of them. Along with her children, servants and mother-in-law she sits and waits to see if the enemy with come ever closer. And she does what she does best, keeps an account of the thoughts and feelings of herself and those around her, aware that she is living through history.
‘Most people knew in their hearts that the lid had been taken off hell, and that what had been done in Guernica would one day be done in London, Paris and Berlin.’
The author reflects on the Great War, when she lost her beloved brother, all too aware that others are currently experiencing such losses. She comments on man’s ability to destroy and to be able to recover, though she fears that day is far off.
Publication date – 23 March 2021
There is the sense of the undercurrent of fear that pervaded everyday life. Going to the shops, ration book in hand, looking for cover when planes flew overhead. The sights and sounds and second-hand experience of the children sent from towns and cities for the relative safety of rural areas and the worry that her husband will get caught in the bombings in London.
A fascinating insight into the lives of those not on the front line.
This is an intimate snapshot of the war, seen through the eyes of a woman used to envisaging made up worlds but who has come to realise that truth can be stranger and more fearful than fiction.
Told in diary form there is an immediacy to the narrative. The reader is hearing Margaret Kennedy’s thoughts, decades after the fact. We get a brief insight into the maelstrom of emotions the war inflicted. There are snippets of fun, of excursions to the seaside and picnics interspersed with more terrifying events such as seeing bombers fly overhead.
Margaret Kennedy’s prophetic words, written about the pre-war mood in Europe, give the tone of this riveting 1941 wartime memoir: it is Mrs Miniver with the gloves off. Her story, taken from her war diaries, conveys the tension, frustration and bewilderment of the progression of the war, and the terror of knowing that the worst is to come, but not yet knowing what the worst will be.
Source – review copy 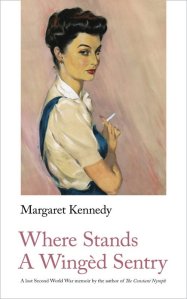