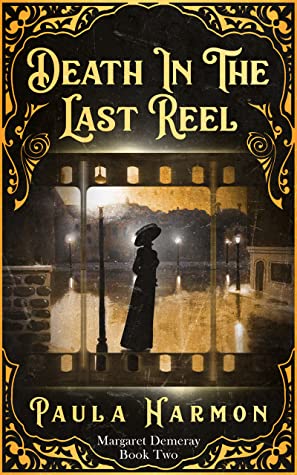 EXTRACT
Buy Links:Margaret bent to the crumpled form, lifting the hat to give the woman more air and smiling so that she’d see a friendly face when she returned to consciousness. But the woman’s eyes were already open and no amount of friendliness would be perceived by her ever again.Half an hour later, Margaret was settled in the dining car of the train, being served tea and cake. She tried to read her book, but the words jumbled and made no sense. She put it down and looked round the carriage at the other first-class passengers, who were as predictable as usual, then stared through the window as they neared Kerzers. Her heart beat a little faster, half hoping to see Fox waiting on the platform ready to board. When, naturally, he wasn’t, she cursed herself for being worse than an adolescent and returned to her book as the train pulled out of the station.My thanks to Zoe of Zooloo Book Tours for the place on the tour and for providing the extract. Death in the Last Reel is the second book in the Dr Margaret Demeray historical series, (the first being The Wrong Sort to Die).ABOUT THE BOOKOn the platform passengers milled about, getting in each other’s way. Some were rushing to board, others heading for the exit. Those like Margaret, who had been on the train for some time and were bound for Paris, simply ambled, taking the opportunity to breathe outside air even though it was full of engine smoke, tobacco smoke and smuts. Porters ran luggage trolleys over people’s feet and passengers lugging their own cases about, bumped them into shins. I may as well go to the café and see if they have a souvenir, thought Margaret. But as she saw the crush of people heading in towards it, she walked away from the melée and smoke to make a quick sketch of the chaotic platform. Author Links It was far too early to be drunk, but the crush was enough for anyone to faint.
Demeray, Book 2) – Paula Harmon
Publisher: January Press
Format : Ebook, Paperback (30 November 2021)
336/429 pages
Genre: Historical Fiction
Paula Harmon was born in North London to parents of English, Scottish and Irish descent. Perhaps feeling the need to add a Welsh connection, her father relocated the family every two years from country town to country town moving slowly westwards until they settled in South Wales when Paula was eight. She later graduated from Chichester University before making her home in Gloucestershire and then Dorset where she has lived since 2005. She is a civil servant, married with two adult children. Paula has several writing projects underway and wonders where the housework fairies are, because the house is a mess and she can’t think why.
Death in the Last Reel (Dr Margaret
In the shadow of violence in the East End, just as Dr Margaret Demeray starts to gain recognition for her pathology work, a personal decision puts her career at the hospital under threat. Needing to explore alternative options, she tries working with another female doctor in Glassmakers Lane. But in that genteel street, a new moving-picture studio is the only thing of any interest, and Margaret’s boredom and frustration lead to an obsessive interest in the natural death of a young woman in a town far away. Meanwhile intelligence agent Fox is trying to establish whether rumours of a major threat to London are linked to known anarchist gangs or someone outside Britain with a different agenda. When another mission fails and he asks Margaret to help find out who provided the false intelligence that led him in the wrong direction, she can’t wait to assist.
‘Stop standing in the way of bullets.’
‘I will if you will.’
Does the camera ever lie?
‘Thank you.’ Margaret stretched and went to the compartment for her coat.

ABOUT THE AUTHOR
If it hadn’t been for someone audibly exclaiming ‘soûlarde stupide’ as they rushed for the exit, Margaret would never have noticed that the brown bundle she’d just passed on the platform was not luggage, but a woman. She was bundled in an oversized, heavy coat and a large hat hid her face, while strands of blonde hair straggled on her shoulders. A handbag was slipping from half-curled fingers.
But enquiries in wealthy Hampstead and then assaults in Whitechapel backstreets lead unexpectedly back to Glassmakers Lane. How can such a quiet place be important? And is the dead young woman Margaret a critical link or a coincidental irrelevance?

‘Madame, madame…’ A strange French voice drifted into dreams of mountains and goatherds and Fox’s worried face, and she blinked herself awake to see a smiling waiter. ‘Madame, we are just arrived at Neuchâtel. A connecting train is half an hour behind schedule; perhaps you wish to have a stroll in the fresh air while we wait. Never fear, madame, we will gain speed afterwards and arrive at Paris in time for you to catch the boat train if you need to.’

How can Margaret persuade Fox to stop protecting her so that she can ask the questions he can’t? And even if she does, how can they discover is behind the threat to London when it’s not entirely clear what the threat actually is? 1911: After the violent murder of three policemen in the line of duty, tensions between London constabulary and Whitechapel anarchists simmer. Meanwhile accusations and counter accusations of espionage further weaken relations between Germany and Britain. Can Margaret Demeray and Fox find out which potential enemy is behind a threat to the capital before it’s too late?
Margaret and Fox need to work together; but both of them are independent, private and stubborn, and have yet to negotiate the terms of their relationship.