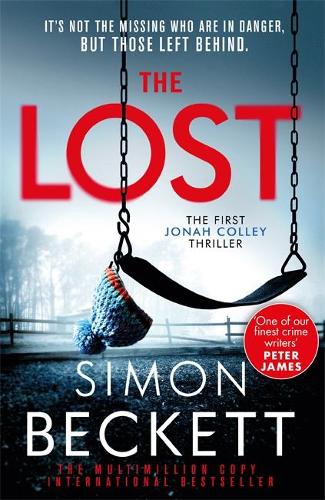 In addition to the six David Hunter titles, the most recent of which is The Scent of Death, he has written five standalone novels, one of which, Where There’s Smoke, was adapted into a major ITV two-part drama.
The Lost is one of those fast paced reads which throws you into the action from the beginning. Jonah Colley isn’t a hero, he has his flaws but he is inherently decent. With every twist and turn in this complicated tale he seems to end up further in trouble and I did wonder whether he would ever get a break. Whilst recovering from his injuries and having a loathsome detective on his back, he faces an uphill struggle to clear his name – even if some of his actions don’t exactly help his cause!A plea for help from an old friend leads Jonah to Slaughter Quay, and the discovery of four bodies. Brutally attacked and left for dead, he is the only survivor.
ABOUT THE BOOKJOINT WINNER OF THE EUROPEAN CRIME FICTION STAR ‘RIPPER’ AWARD 2018/19Ten years ago, the disappearance of firearms police officer Jonah Colley’s young son almost destroyed him.A GRUESOME DISCOVERY
Author Links:
Firearms officer Jonah Colley’s life fell apart the day his 4 year old son Theo disappeared and he is haunted by feelings of guilt. He has never given up hope that Theo may still be alive and has always had a suspect in mind but was never able to prove it. Ten years later a phone message from an old friend and colleague he hasn’t spoken to for years leads him to an abandoned warehouse at the aptly named Slaughter Quay. He could have no idea what awaits him or how the events that follow would make him reassess the past.

MY THOUGHTS
Publisher: Trapeze
Format: Ebook, Audio, Hardback (25 November 2021) | Paperback (9 June 2022)
Pages: 368
Source: Digital copy to review via Netgalley
The Lost is a dark and addictive read that leads to a tense and gripping conclusion. There are enough murders to satisfy a hardened crime fan but none so gory that anyone could be put off. I do love to be in at the start of a new series and this is one I shall follow with interest.
Under suspicion himself, he uncovers a network of secrets and lies about the people he thought he knew – forcing him to question what really happened all those years ago…
Simon Beckett is the No.1 International Bestselling author of the David Hunter series. His books have been translated into 29 languages, appeared in the Sunday Times Top 10 bestseller lists and sold over 10 million copies worldwide. A former freelance journalist who has written for The Times, The Daily Telegraph, The Independent on Sunday and The Observer, the inspiration for the first David Hunter novel came after a visit to the world-renowned Body Farm in Tennessee introduced him to the work of forensic anthropologists.

A SEARCH FOR THE TRUTH

The Lost is the first in a new crime series by Simon Beckett. Readers may be familiar with Simon’s David Hunter series – I’ve reviewed one here on the blog The Restless Dead – it was such an enjoyable read that I didn’t hesitate to accept a tour invite from Tracy Fenton of Compulsive Readers to review The Lost. My thanks to Tracy and to the publisher for the Netgalley copy to review.

ABOUT THE AUTHOR
A MISSING CHILD
As well as co-winning the Ripper Award in 2018/19, the largest European crime prize, Simon has won the Raymond Chandler Society’s ‘Marlowe’ Award and been short-listed for the CWA Gold Dagger, CWA Dagger in the Library and Theakston’s Crime Novel of the Year.
This was both an intriguing and exciting read where the past intertwines with the present. In the ten years since Theo’s disappearance the people closest to Jonah have moved on with their lives however whilst trying to solve the mystery that he has found himself embroiled in he has to make some emotional reconnections. He made mistakes but it’s easy to feel sympathetic towards him and I did think he unfairly took all the blame on himself that day.
Find out more on www.simonbeckett.com, or follow him on Twitter, Facebook and Instagram.