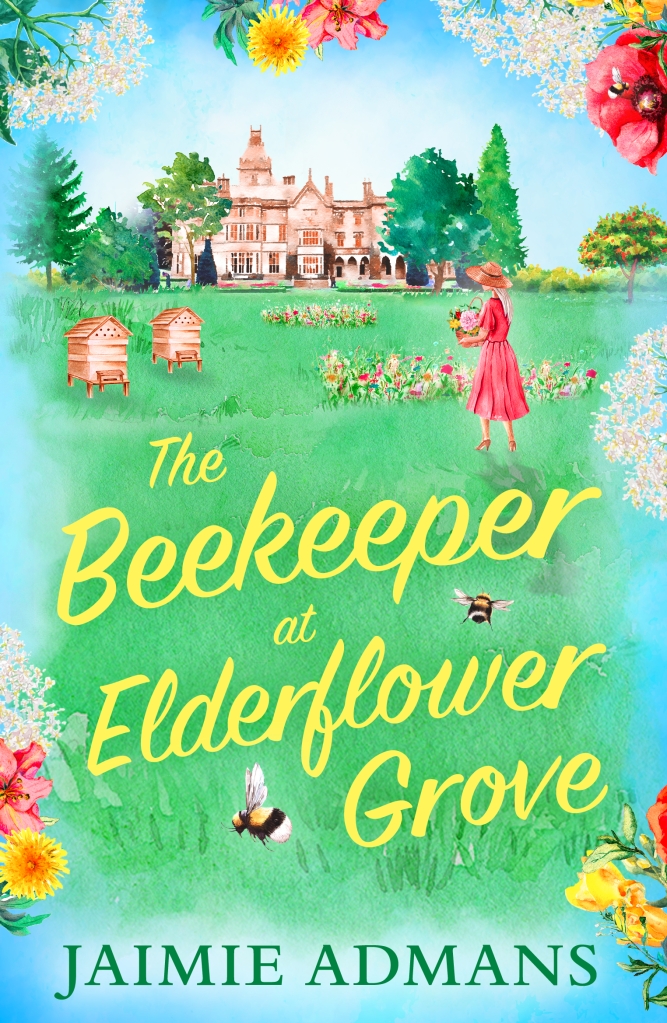 There was so much I enjoyed in the book from the references to Kayleigh’s beloved Jane Austen, to the interesting facts about bees at the start of each chapter, to the community spirit of the locals as they fight to save the house and grounds from redevelopment and council skulduggery, and there are a fair few moments of drama and danger.
Twitter: http://www.twitter.com/be_the_spark
Carey explains that the house and surrounding land is at risk of being demolished, endangering the bees, and he has been staying there to protect it.
I really loved the setting of Elderflower Grove with the abandoned old manor house proving to be not just a significant setting but really a character in itself. There is mystery surrounding the fire and presumed death of the previous owner and all sorts of rumours about it being haunted. Even before the fire, the elderly owner Josie kept herself to herself and really only had the irrepressible Gracie as a friend.
Convinced the secret of the house holds the key to saving Elderflower Grove’s bees, Kayleigh is prepared to do everything she can to help. But is she ready to find her own happy-ever-after too…?
The abandoned house holds a mystery of its own – the previous owner vanished years ago – and locals have been inventing stories about the manor ever since. Unable to resist the urge to look around, Kayleigh is shocked to find drop-dead-gorgeous gardener Carey living inside!
Purchase Links
She is the author of several romantic comedies for HarperCollins – The Chateau of Happily Ever Afters, The Little Wedding Island, It’s a Wonderful Night, The Little Vintage Carousel by the Sea, Snowflakes at the Little Christmas Tree Farm, The Little Bookshop of Love Stories, The Wishing Tree Beside the Shore, The Little Christmas Shop on Nutcracker Lane, The Post Box at the North Pole, and The Beekeeper at Elderflower Grove.
Facebook: http://www.facebook.com/jaimieadmansbooks
Amazon US: http://www.amazon.com/dp/B09Z757JFW
The Beekeeper at Elderflower Grove was fun and engaging from the start. Kayleigh is interviewed online for the position of beekeeper by a bee! Well, not really of course but someone using a bee filter to hide their identity. They are impressed by her honesty and give her the job. If only she’d actually been honest about not knowing the first thing about bees! I mean, what could possibly go wrong?
Having moved into her mum’s spare room after a disastrous break-up, Kayleigh Harwood is desperate for a fresh start. When she sees an opening for a new beekeeper at the old manor house at Elderflower Grove she jumps at the chance – despite not knowing a thing about bees…
So does The Beekeeper at Elderflower Grove join my list of five star reads from Jaimie Admans? Well, yes of course it does! It’s suffused with warm (dare I say sweet?) humour throughout, making this book a delight to read.
My Thoughts
Thanks to Rachel at Rachel’s Random Resources for the invitation to take part in the blogtour and for providing an e-copy for review. The Beekeeper at Elderflower Grove is published by HQ Stories and available now in ebook format. The paperback will follow in September.
This being a Jaimie Admans book there is of course a romance and from reading the book description you’ll not be surprised to know it features Kayleigh and the gardener Carey. I really liked the way their relationship developed from companionship into friendship and then into deeper feelings. Carey’s t-shirts made me laugh although I rather liked the sound of him all done up like an Austen character too. Carey had more than a few secrets of his own that once revealed threatened the future of their developing romance. Could they have their happy ending? Well, you’ll need to read it to find out.
Jaimie is a 36-year-old English-sounding Welsh girl with an awkward-to-spell name. She lives in South Wales and enjoys writing, gardening, watching horror movies, and drinking tea, although she’s seriously considering marrying her coffee machine. She loves autumn and winter, and singing songs from musicals despite the fact she’s got the voice of a dying hyena. She hates spiders, hot weather, and cheese & onion crisps. She spends far too much time on Twitter and owns too many pairs of boots. She will never have time to read all the books she wants to read.

About the AuthorAmazon UK: http://www.amazon.co.uk/dp/B09Z757JFW
I am a big fan of Jaimie Admans’ books – every one of hers that I have read I have given five stars to. Will The Beekeeper at Elderflower Grove join that list? Well, read on to find out first of all what the book is about and then what I thought of it.
Social Media Links
Her new start is about to bee-gin!