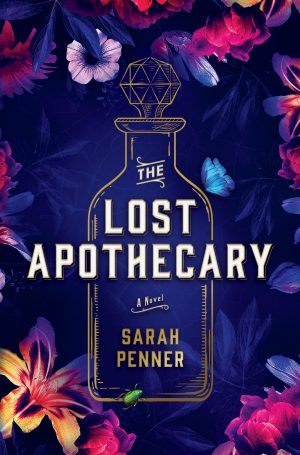 This is an atmospheric and engrossing historical tale of murder by poison together with a touch of magical realism. The issue of betrayal features heavily throughout and the moral issue aside as to whether Nella should have been providing women with the means to kill their menfolk, The Lost Apothecary is a thoroughly enjoyable story bringing together the past and the present.
Twelve year old Eliza Fanning comes into Nella’s shop, on behalf of her mistress to collect a poison. An inquisitive and intelligent child she becomes interested in poisons and ‘magick’ – however her presence in the shop will have repercussions that no-one could forsee.
The modern day strand features Caroline, an American in London for her tenth wedding anniversary. Her trip has not worked out as she had hoped but while out ‘mudlarking’ by the Thames, she makes a discovery which piques her historian senses, and she turns detective.

With crackling suspense, unforgettable characters and searing insight, The Lost Apothecary is a subversive and intoxicating debut novel of secrets, vengeance and the remarkable ways women can save each other despite the barrier of time.
There are two timelines to this story, London in 1791 and the present day. In 1791 in 3 Back Alley, apothecary Nella is carrying on her mother’s shop of dispensing potions for women’s ‘maladies’, the details of which was dispensed and who procured them she keeps in a register. When her mother had the shop, she only dispensed potions for the good, however Nella has diversified. Her life is about concealment, she also makes up poisons to be used against men who have betrayed and abused – however she has one rule. No women shall be harmed.
So, what drew me to this book when I received the email inviting to take part in the blog tour. I won’t lie. At first glance it was the cover. I am a sucker for a stunning cover and this is one of the prettiest. Then I looked at the blurb – historical fiction – tick. Poisons and murder. Yes please! I must also mention that there is a map of old London City at the front, where places and landmarks mentioned in the book are marked. I do love a map!
Meanwhile in present-day London, aspiring historian Caroline Parcewell spends her tenth wedding anniversary alone, running from her own demons. When she stumbles upon a clue to the unsolved apothecary murders that haunted London two hundred years ago, her life collides with the apothecary’s in a stunning twist of fate―and not everyone will survive.

ABOUT THE AUTHOR
The historical aspect of the story kept me entranced. The details of the poisons, how they are used, the gathering and crushing of the beetles (not so!) was fascinating. Nella was an intriguing character. She had her own tragic backstory and because of it, she dedicated her life to helping women in need. Eliza was an interesting mixture of precociousness, cunning and cuteness with a wish to befriend and to belong. Made to grow up quickly, she seemed older than her years and it was easy to forget that she was only a child.
Sarah Penner is the debut author of The Lost Apothecary, to be translated in eleven languages world- wide. She works full-time in finance and is a member of the Historical Novel Society and the Women’s Fiction Writers Association. She and her husband live in St. Petersburg, Florida with their miniature dachshund, Zoe.
Caroline had an eventful journey in this story, without giving away any details. Although I felt sympathy for her plight and was keen to know how everything worked out for her, it was Nella and Eliza which interested me the most, especially when a poisoning goes wrong and has shocking consequences.
Author Links:
Website | Twitter | Facebook | Instagram | Goodreads | Amazon UK

My thanks to Lucy of Legend Press for the tour invitation and for providing the Netgalley widget.

MY THOUGHTS
Hidden in the depths of eighteenth-century London, a secret apothecary shop caters to an unusual kind of clientele. Women across the city whisper of a mysterious figure named Nella who sells well-disguised poisons to use against the oppressive men in their lives. But the apothecary’s fate is jeopardized when her newest patron, a precocious twelve-year-old, makes a fatal mistake, sparking a string of consequences that echo through the centuries.