Broadcast to millions from its picturesque location off the coast of Jersey, Falcon Bay was once the world’s most popular soap opera. But with ratings at an all-time low, a new network owner, the malevolent Madeline Kane, arrives on the private island determined to do whatever it takes to get the show back to the number 1 slot.
As Madeline’s pressure to revive the show intensifies, she unleashes a true battle of the sexes where the women will do anything to stay in the jobs they love and on the island they call home. Can they team up to bring down their rivals? Or will jealousy, betrayal and revenge rip their friendships apart? As the story reaches its shocking climax, one thing is for certain: only the most ruthless woman will survive…
Ambition can be deadly
Director Farrah, leading lady Catherine and producer Amanda are the driven, ambitious women who’ve been trying to hold the production together. But thanks to their handsome but corrupt boss, Jake Monroe, Farrah is losing episodes to male colleagues, seventy-year-old Catherine is terrified of losing the public’s adoration, and Amanda is battling her desire for a forbidden affair with a handsome new employee.
It was not unusual for fans of one of the world’s most
famous soap operas to spend hours on Google Earth
zooming in on Falcon Bay’s location, circling the glorious
sandy beaches of St Augustine’s island in search of the
show’s legendary sets. Some even hired fishing boats to
get closer to the secret cove where the Bay was filmed,
hoping to spot something they weren’t meant to see and
perhaps even one of the stars off-duty. But security was
tight so no one had got past the Bay’s burly coastguards in
decades.
Located in Jersey’s English Channel, the picture-postcard sized island of St Augustine’s was nineteen miles off the
French coast and a hundred miles off the south coast of
England and truly felt like a tiny piece of paradise in the
middle of nowhere. Press drones often caught glimpses of
the cast and crew hard at work filming one of TV’s longest running shows, but it was a good job they couldn’t hear the
conversations inside the glass-fronted production offices,
because if they could, they’d have quickly realized that the
action off screen was way more dramatic than anything its
millions of viewers ever got to see.
Meeting Room 6 – where Jake Monroe, just moments
ago, had decreed that their Christmas episode would be
filmed live – was positioned on the outer edge of the studios.
These were comprised of several aircraft-hangar-sized buildings which were home to everything required to make a
global hit show that was aired six times a week. Just down
the corridor was a big open-plan production office where
directors, PAs, script editors and most of the show’s crew had
their own spaces. This was the central hub of the building;
it was Space Command, it was where people shouted across
desks, conversations merged and fizzed with the electricity
of gossip and new ideas. It was these conversations that the
Bay’s diehard fans would have loved to eavesdrop on – the
snap decisions that affected the soap they adored. A mere
five minutes spent in this production office and any visitor
would be bitten by the TV bug forever. It was sexy, exciting
and buzzing with life, but, like many bugs, it could also be
venomous, career-ending and deadly.
A left turn out of the production office led to the internal
studio sets. This was where the interiors of the characters’
homes were located: fake houses, with movable walls and no
ceilings, designed to make the pretend residences look real.
There were over 200,000 square feet of sets here, with each
set carefully decorated to reflect the character that inhabited
it – an impressive world of make-believe.
A right turn out of the production office took you into
a long corridor with doors all the way down it. These were
for the heads of departments. Behind one of them was Helen
Gold’s office. Her room was bigger than many, because she
needed to meet actors in there, sometimes several at a time.
So many famous people had been through her office, not to
mention the dozens of people who weren’t yet famous but
because of Helen would go on to become superstars. This
room was where the ordinary joe could become the face of
the future. 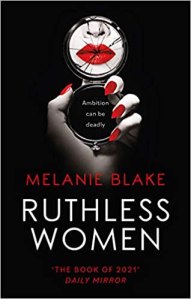 Today I have an extract from the book.
Everyone’s talking about Ruthless Women…
Melanie Blake is the author of The Thunder Girls. Her latest novel, Ruthless Women, is published by Head of Zeus on 18 February 2021.
About the Book