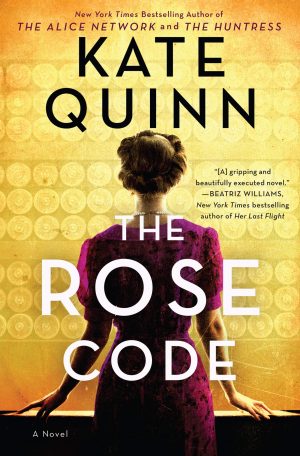 My thanks to Anne Cater of Random Things Tours for the place on the tour. I am only sorry that I wasn’t able to fit this in to review. I’m intrigued by any story concerning Bletchley Park, and add in the Royal element – this sounds just my kind of book!
A knock sounded. Osla flung on a robe to answer it. Her flat was tiny, all she could afford on her Tatler salary if she wanted to live alone and be close to the center of things. “Darling, no maid? No doorman?” Her mother had been appalled. “Move in with me until you find a husband. You don’t need a job.” But after sharing bedrooms with billet-mates all through the war, Osla would have lived in a boot cupboard as long as she could call it her own.
Three very different women are recruited to the mysterious Bletchley Park, where the best minds in Britain train to break German military codes.
1947, London
The enigma arrived in the afternoon post, sealed, smudged, and devastating.
November 8, 1947 London
The brand-new novel from the internationally bestselling author of The Huntress and Reese Witherspoon Book Club pick The Alice Network

”It’s not enough to look scrummy, Osla thought, taking her bundle of letters. I want to outshine a princess, an actual born-to-the-tiara princess, and the fact is, I can’t.
Author Links:
Twitter | Website | Facebook | Instagram | Goodreads | Amazon.UK
PROLOGUE
EXTRACT
Osla Kendall stood, twenty-six years old, dark haired, dimpled, and scowling, in the middle of a tiny Knightsbridge flat that looked as if it had been bombed by Junkers, wearing nothing but a French lace slip and a foul mood as she looked at the piles of silk and satin exploding over every surface. Twelve Days Until the Wedding of the Century! this morning’s Tatler had gushed. Osla worked for the Tatler; she’d had to write the whole ghastly column. What are YOU going to wear?

ABOUT THE AUTHOR
“Stop that,” she told herself as soon as she’d shut the door on the landlady’s daughter. “Do not fall in the dismals, Osla Kendall.” All over Britain, women were planning what they’d wear for the most festive occasion since V-E Day. Londoners would queue for hours to see the flower-decked wedding carriages roll past— and Osla had an invitation to Westminster Abbey itself. If she wasn’t grateful for that, she’d be just like those ghastly Mayfair moaners blithering on about how tiresome it was attending the social event of the century; what a bother getting the diamonds out of the bank, oh, woe is me to be so tediously privileged.
Seven years after they first meet, on the eve of the royal wedding between Princess Elizabeth and Prince Philip, disaster threatens. Osla, Mab and Beth are estranged, their friendship torn apart by secrets and betrayal. Yet now they must race against the clock to crack one final code together, before it’s too late, for them and for their country.
Vivacious debutante Osla has the dashing Prince Philip of Greece sending her roses – but she burns to prove herself as more than a society girl, working to translate decoded enemy secrets. Self-made Mab masters the legendary codebreaking machines as she conceals old wounds and the poverty of her East-End London upbringing. And shy local girl Beth is the outsider who trains as one of the Park’s few female cryptanalysts.
Kate Quinn is a native of southern California. She attended Boston University, where she earned a Bachelor’s and Master’s degree in Classical Voice. A lifelong history buff, she has written four novels in the Empress of Rome Saga, and two books in the Italian Renaissance detailing the early years of the infamous Borgia clan. All have been translated into multiple languages. She and her husband now live in Maryland with two black dogs named Caesar and Calpurnia.
1940, Bletchley Park, Buckinghamshire
📚📚📚📚📚📚📚📚📚📚📚📚📚📚📚
“Post’s come, Miss Kendall.” The landlady’s spotty daughter greeted her at the door, eyes going at once to the rose gown slung over Osla’s arm. “Oooh, are you wearing that to the royal wedding? You look scrummy in pink!

“It’ll be topping,” Osla said through gritted teeth, coming back to her bedroom and chucking the rose dress over a lamp. “Simply topping.” Seeing London swanning about in banners and confetti, wedding fever whisking away November chill and postwar gloom . . . the fairy-tale union of Princess Elizabeth Alexandra Mary and her handsome Lieutenant Philip Mountbatten (formerly Prince Philip of Greece) would mark the dawn of a new age, hopefully one where ration laws were finally swatted down and you could slather all the butter you wanted on your scones. Osla was all in favor of ushering this new era in with a slap-up celebration— after all, she’d achieved her own fairy-tale ending by any woman’s standards. An honorable term of service during the war, even if she could never, ever talk about it; a flat in Knightsbridge paid for by her own salary; a wardrobe crammed with gowns all in the latest go; a job writing entertaining fluff for the Tatler. And a fiancé who had put a sparkling emerald on her finger; don’t forget him. No, Osla Kendall had no excuse to get in a blue funk. All the business with Philip had been years ago, after all.
Osla picked up a rose satin gown whorled with crystal beading. “What about you?” she asked it. “Do you say ‘I look simply smashing and I couldn’t care less that he’s marrying someone else’?” Etiquette lessons at finishing school never touched that one. Whatever the dress, everyone in the congregation would know that before the bride came along, Osla and the bridegroom were—