The Devonport family are all dislikeable in their own way. Mr and Mrs Devonport rule with iron fists, their children especially afraid of their father. Daisy is manipulative and self absorbed, seeking attention in the wrong way. Richard, the one to have called in Poirot, is down-trodden and weary. The only one of note is Frank, the murdered son, and the one who seems to have taken all of the warmth and love with him to his grave.
Like many people I am a huge fan of Golden Age crime novels. The doyenne of the era is of course Agatha Christie. Her novels are only outsold by the bible and William Shakespeare so it’s safe to say she is as popular now as she has even been. It’s also some legacy to leave and it is a brave author that takes up her stories and continues them. There’s always the worry when someone else takes over the mantle of established characters. This is perhaps doubly the case when that author is the inimitable Agatha Christie. There was no need to worry with this instalment. Yes the reader will always know that story was not concocted by Christie but all the foundations are hers. Her character is a legend in his own right, easy to envisage, to replicate and to imagine in this new investigation, which is as inventive and devious as any of Poirot’s earlier cases. 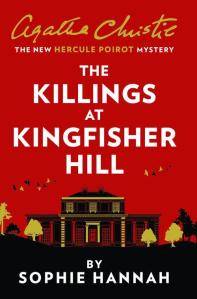 Nothing can quite beat a return visit to an old friend. The Killings at Kingfisher Hill sees the return of the egg shaped detective with the famous grey cells and infamous ego. Poirot is back by the pen of Sophie Hannah.
The coach is forced to stop when a distressed woman demands to get off, insisting that if she stays in her seat, she will be murdered. Although the rest of the journey passes without anyone being harmed, Poirot’s curiosity is aroused, and his fears are later confirmed when a body is discovered with a macabre note attached…
Poirot and his friend Inspector Catchpool are off to visit the Devenport family home at Kingfisher Hill. They are there to secretly investigate the murder of Frank Devonport. His fiancée has admitted the murder but his brother is not convinced of her guilt. First they must brave Mr Busby’s Kingfisher Hill Coach. Whilst waiting to embark they come across a young woman, hysterical, saying she had been told she would be killed if she stays in her seat on the coach. Later on in the journey Poirot hears a shocking tale. On arriving at Kingfisher Hill, it’s clear that all is not as it seems. Then a body is found and Poirot faces solving not one but two murders. Two admissions to the same murder. Will Poirot figure out what really happened at Kingfisher Hill or will both confessors go free?
The mystery itself is engaging. How can two people both confess to a murder? What possible motive did Helen have to kill Frank, who she clearly adored? Who is the body later found? The clues are dotted about and red herrings to throw the reader, and Catchpool off the scent, though there are some things kept close to the author’s chest so that they aren’t revealed until Poirot tells his gathered audience.
Publication date – 13 May 2021
Source – review copy
Published by Harper Collins
A fun, entertaining read that challenges the little grey cells. It has made me want to go back and read more exploits of the Belgian detective. I look forward to seeing more from Ms Hannah and M Poirot in the future.
Told much like the earlier Poirot books, narrated by a confederate of the Belgian, this time the teller of the tale is Inspector Catchpool rather than Captain Hastings. Catchpool, much like the Captain, feels wrong-footed when around Poirot, constantly playing catch up and floundering to work out what his friend realised many pages back.
Could this new murder and the peculiar incident on the coach be clues to solving the mystery of who killed Frank Devonport? And if Helen is innocent, can Poirot find the true culprit in time to save her from the gallows?
Hercule Poirot is travelling by luxury passenger coach from London to the exclusive Kingfisher Hill estate, where Richard Devonport has summoned him to prove that his fiancée, Helen, is innocent of the murder of his brother, Frank. But there is a strange condition attached to this request: Poirot must conceal his true reason for being there.