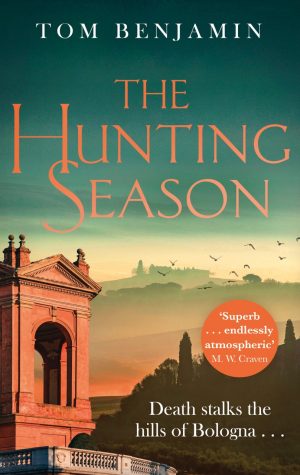 Find Tom on Instagram, Twitter and Facebook at tombenjaminsays or at tombenjamin.com
‘Ryan,’ said Mr Lee, ‘our boy, he’s a supertaster.’ He looked at me as if this explained everything. I looked at the Comandante, who clearly had no clue either. ‘It’s like perfect pitch,’ said Mr Lee, ‘only for taste. It means you’ve got more, literally more taste buds, but also . . . what are they? Smell? Smell buds? Anyway, cells or whatever’s in your nose, and they combine, and, well, you can taste things other people, no matter how well trained – and actually, he was really well trained – can. No computer can do that stuff. That’s what I said, wasn’t it, Mary? No computer’s going to be able to do that stuff, so Ryan, our Ryan’s going to be just fine.’ His voice broke. His wife took his hand and placed it on her lap. She began to explain.
Discover Bologna through the eyes of English detective Daniel Leicester as he walks the shadowy porticoes in search of the truth and, perhaps, even gets a little nearer to solving the mystery of Italy itself. A Quiet Death in Italy is the first novel in his Daniel Leicester crime series.
Only he hadn’t been there when they arrived. They had waited, called his cell but it had gone straight to voicemail. They had sent messages, but he hadn’t replied – or even opened them, said Mr Lee – they had emailed from their hotel. That was two days ago, and there was still no trace.

They looked at each other. ‘I know this must seem terrible,’ said Mr Lee. Mrs Lee squeezed his hand. ‘But we didn’t think to ask. I mean, we just expected him to be at the airport, or to get in touch. Ryan travels a lot. He’s a freelance, has lots of clients. Always on the move . . . Italy, the South of France. His speciality is truffles.’
That English sun was slicing through the blinds into the Lees’ eyes, so I pulled them closed. I kept the window behind open: the Comandante’s office had had the weekend to rid itself of the old man’s cigarette smoke, but I knew that even though he would refrain from lighting up in deference to the Lees, the legacy of his packet-a-day would reassert itself soon enough if I didn’t keep the air circulating.
As he goes on the hunt for Ryan Lee, Daniel discovers the secrets behind ‘Food City’, from the immigrant kitchen staff to the full scale of a multi-million Euro business. After a key witness is found dead at the foot of one of Bologna’s famous towers, the stakes could not be higher. Daniel teams up with a glamorous TV reporter, but the deeper he goes into the disappearance of the supertaster the darker things become. Murder is once again on the menu, but this time Daniel himself stands accused. And the only way he can clear his name is by finding Ryan Lee…
‘So we don’t know his client.’ They shook their heads. ‘Never mind. Has this kind of thing happened before? I mean, a sudden loss of contact, disappearance, that sort of thing?’
EXTRACT
‘Like I said . . .’ Mr Lee managed to look both desperate and ashamed.
The plan had been to meet them at the airport. He was often in Italy for work and they had always wanted to visit. This time they thought it would be great to meet up in Bologna, and maybe, if Ryan had the time, he could join them on trips to Florence and Venice.
AUTHOR LINKS

Tom Benjamin grew up in London and began his working life as a reporter before becoming a spokesman for Scotland Yard. He went on to work in international aid and public health, developing Britain’s first national programme against alcohol abuse and heading up drugs awareness campaign FRANK. He now lives in Bologna, Italy.
‘This isn’t the same hotel Ryan’s staying at?’ I said.
The pair were sitting on the bottle-green chesterfield sofa. I took a matching armchair opposite alongside the Comandante. Between us and our would-be clients was a glass-topped art deco coffee table, upon it a clean crystal ashtray, a pair of rarely opened hardback books on Bolognese architecture and, within a rather beautiful amber-stained Lucite box, fresh tissues. It could have been a gentleman’s club or a therapist’s. It sometimes felt like both.

ABOUT THE AUTHOR
‘Never,’ said Mrs Lee.
‘So you don’t know where he is staying?’
It’s truffle season and in the hills around Bologna the hunt is on for the legendary Boscuri White, the golden nugget of Italian gastronomy. But when an American truffle ‘supertaster’ goes missing, English detective Daniel Leicester discovers not all truffles are created equal. Did the missing supertaster bite off more than he could chew?My thanks to Anne Cater of Random Things Tours for the invitation and the place on the tour.

Mrs Lee shook her head. ‘Well, it could have been, but we booked it online, it was an offer. We asked the desk if he was there,’ she added. ‘Just in case.’

‘Then his client here . . .’
While regular food tasters would sample food to assure its taste, smell, appearance and so on, supertasters, with their rarefied senses, were an elite breed and Ryan was flown in by clients around the world to check the quality of their wares.
The second atmospheric crime thriller in the Daniel Leicester series, set in the beautiful Italian city of Bologna. Perfect for fans of Donna Leon, Michael Dibdin and Philip Gwynne Jones.