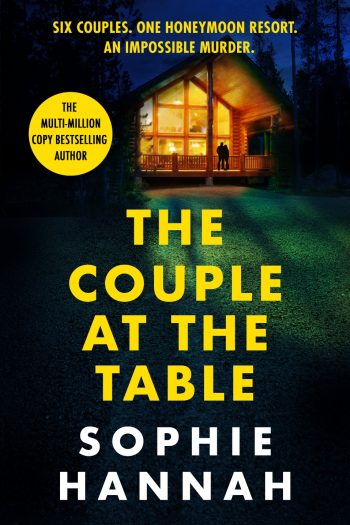 You’re on your honeymoon at an exclusive couples-only resort.
The Couple at the Table is certainly a story that will intrigue and confuse. In my attempt to figure out the guilty party, I was reminded of a certain Agatha Christie story which wouldn’t have been so much of a stretch, given the author’s recent history writing the
Haven’t They Grown (2020)
You receive a note warning you to ‘Beware of the couple at the table nearest to yours’. At dinner that night, five other couples are present, and none of their tables is any nearer or further away than any of the others. It’s as if someone has set the scene in order to make the warning note meaningless – but why would anyone do that?
SIX COUPLES. ONE LUXURY RESORT. AND THE PERFECT MURDER . . .
Author Links: You have no idea. You also don’t know that you’re about to be murdered, or that once you’re dead, all the evidence will suggest that no one there that night could possibly have committed the crime.
Publisher: Hodder & Stoughton
Format: Ebook, Audio, Hardback (27 January 2022)
Pages: 364
Source: Copy received for review
ABOUT THE AUTHOR
The murder takes place at a luxury house resort, Tevendon Estate in the Culver Valley. The couples at the resort are a diverse bunch however there is one person who has more motive than anyone else but an alibi seems to rule them out. The murder has already happened by the start of the book and we see the event through letters and flashbacks in narrative.
This has such an intriguing premise. I love books that have a puzzle to solve and here even DS Simon Waterhouse, in charge of the murder investigation is totally flummoxed. Several months and many hand drawn maps later (there are two in this book – I do love a map), he is no nearer to finding the killer and he has his boss DI Proust on his back demanding a result as there is other work to be done.
Going between a timeline of July 2019 and January 2020, the author leads the reader on a merry dance of suspicion and secrets. I kept thinking I knew who the killer was, then something else would come to light and I would change my mind. In all honesty, I didn’t really care about the victim – they were so vile that I could have been tempted to bump them off myself!
SOPHIE HANNAH is an internationally bestselling crime fiction writer. Her psychological thriller The Carrier won the Specsavers National Book Award for Crime Thriller of the Year in 2013. Sophie is the author of the bestselling Poirot continuation mysteries. The Point of Rescue and The Other Half Lives have been adapted for television as Case Sensitive, starring Olivia Williams and Darren Boyd. Sophie is also a bestselling poet who has been shortlisted for the TS Eliot award. Her poetry is studied at GCSE and A-level. Sophie is an Honorary Fellow of Lucy Cavendish College, Cambridge. She lives in Cambridge with her family.
Poirot books. With everyone appearing to be hiding something, it seems an impossible one to solve.

So who might be trying to warn you? And who might be about to commit the perfect murder?
MY THOUGHTS I’d forgotten just how pedantic the character of Simon Waterhouse could be. His wife, Sargeant Charlie Zailer was by far the more laid back of the two and interacts with people far more easily. Just as well when one of the suspects she was dealing with seemed rather unbalanced at times with an obsessive habit of writing letters.
My thanks to Jenny of Hodder & Stoughton for the tour invite and the review copy. The Couple at the Table is a return to the Waterhouse & Zailer Culver Valley Crime series. I have to admit it’s several years since I last read a book featuring these characters but that didn’t really matter. This can be read on its own without feeling lost by lack of backstory.