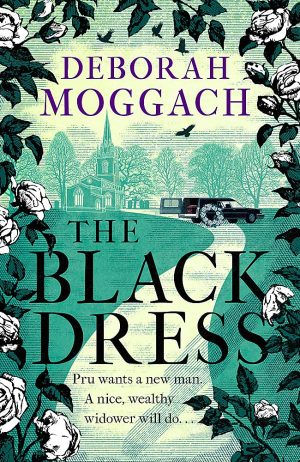 ‘Who needs all this stuff ?’ he’d said. ‘People bust their guts doing jobs they don’t like to buy stuff they don’t need, just to help corporate criminals ruin the planet.’
‘I need solitude, to start my spiritual journey.’ He’d said this without a glimmer of humour. I knew then that I’d lost him. ‘I don’t want anything, you can have it all.’
Greg didn’t fight me for the house. He’d moved onto a higher plane; he made me well aware of that. Our family home had mausoleumed into a repository of junk. My thanks to Anne Cater of Random Things Tours for the invitation and place on the tour. I’m a big fan of Deborah Moggach’s writing and very much looking forward to reading this. For my turn today, I’m delighted to offer an extract of Chapter One. ‘I haven’t got a dog any more.’
That’s no excuse either, but maybe you’ve never been there. Howling loneliness, month after month. I was alone when the lawyer’s letter arrived. No Greg beside me to look at those words wiping out our life together. What’s this all about? Leave it to me. It must have come to the wrong address.
That wasn’t quite true. He’d kept the cottage in Dorset. That’s where he was going to live. We’d talked about retiring there but decided we’d die of boredom. Not now. Greg had moved beyond boredom.
It was a sort of madness. I realised that at the time. How could a woman like me be capable of such a thing? But I’d been horribly betrayed, and was reeling from the shock. I was in freefall, all the branches cut off, nothing to catch me as I fell. And I was insanely lonely.
One
I was alone when the car broke down on the North Circular Road at one in the morning. When a gutter got blocked and water ran down the walls. When a plumber ripped me off, and my laptop crashed.
Deborah Moggach, OBE, is a British novelist and an award-winning screenwriter. She has written twenty novels, including Tulip Fever, These Foolish Things (which became the bestselling novel and film The Best Exotic Marigold Hotel), and The Carer. She lives in London.
Pru’s husband has walked out, leaving her alone to contemplate her future. She’s missing not so much him, but the life they once had – picnicking on the beach with small children, laughing together, nestling up like spoons in the cutlery drawer as they sleep. Now there’s just a dip on one side of the bed and no-one to fill it.
I was alone when a rosy-cheeked vet arrived – just married, she told me  – to put down the dog. I played Joni Mitchell, that song about her lover sniffing his fingers as he watches the waitress’s legs, Sidney’s head lowered and rested, a dead weight, in my lap.
He was already removing himself to an unknown county. We’d never said the word ‘Rutland’ in our lives. So many unknowns he was going to discover without me. His tone was sorrowful but weirdly exultant.
So that was it. I was sixty-nine, and alone for the first time in my life. My friend Azra said: ‘Good sodding riddance. Greg was a tosser, I can say that now. You’re not too old to find another man. Go to the park. There’s plenty of them there, walking their dogs.
EXTRACT
I laughed  –  a startling sound; I hadn’t laughed for weeks. Azra could do that to me. Glorious Azra, sprawled on my sofa in a fug of cigarette smoke. God, I loved her.
‘Rutland?’
Pru is on her own. But then, so are plenty of other people. And while the loneliness can be overwhelming, surely she’ll find a party somewhere?
Gazing at the immensity of the ocean would restore him to himself, a prelapsarian Greg, unmuddied by compromise and familiarity, by a mortgage and a thickening waist, by family rows, by the chronic hopes and disappointments of simply weathering the years. By me.
ABOUT THE AUTHOR
Publisher: Tinder Press
Format: Ebook, Audio, Hardback (22 July 2021) | Paperback (28 April 2022)
Pages: 352
In a daze, Pru goes off to a friend’s funeral. Usual old hymns, words of praise and a eulogy but…it doesn’t sound like the friend Pru knew. And it isn’t. She’s gone to the wrong service. Everyone was very welcoming, it was – oddly – a laugh, and more excitement than she’s had for ages. So she buys a little black dress in a charity shop and thinks, now I’m all set, why not go to another? I mean, people don’t want to make a scene at a funeral, do they? No-one will challenge her – and what harm can it do?

He said he was shedding his possessions and going on a silent retreat in Rutland.

‘You’ve still got his lead, haven’t you? Walk about calling “Sidney, Sidney.” Somebody’s bound to come and help.’