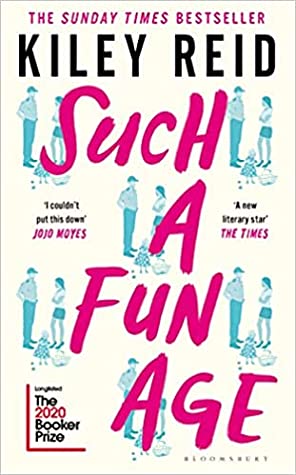 The characters make this novel what it is and Reid fantastically shows how race, class, and gender constantly shape our lives with their invisible tethers. Reid’s writing engages the reader in these themes like no other books I’ve read and ultimately what’s most compelling is the way that almost everyone Emira encounters is a villain of some kind. Alex and Kelley (Emira’s love interest) constantly accuse each other of various misdemeanours but in the end, it’s Emira that suffers, not them.
Making sure I’m reading diversely and ensuring I read anti-racist books has become a priority for me and with a subtle but poignant message running throughout this novel, its impact is immense. Reid’s writing is compelling and powerful and Such a Fun Age should be compulsory reading for everyone.
There’s a moment in the book where Alix lives up to the stereotype of thinking that she’s not racist because she has a black friend and reads Toni Morrison. Moments like this are what make the novel so impactful because it shows the dichotomy between the actions that Alix takes (or doesn’t take) and the life Emira is literally having to live. It’s not about trying to prove you’re not racist, it’s about recognising that we live in a society that has conditioned us all to have some form of unconscious bias and doing our best to fight it and change it.
“I don’t need you to be mad that it happened. I need you to be mad that it just like… happens.”
This book triumphs in its subtlety. Reid manages to present ideas of institutional racism and how society still exhibits both unconscious and conscious bias in a way that doesn’t spoon feed the reader but rather allows them to make the realisations on their own. As a white reader, this book felt as poignant as Reni Eddo Lodge’s Why I’m No Longer Talking to White People About Race, maybe even more so because the fictional characters could so easily be plucked from real life. She doesn’t tell you ‘the behaviour just shown by that character is because of their unconscious bias’ but rather lets you work that out on your own and it’s all the more impactful because of it.
Title: Such a Fun Age
Author: Kiley Reid
Type: Fiction
Published:
Pages:
TW: Racism, Gaslighting, Fat Shaming
8.6Powerful, Important, Compelling

While Reid did a great job of creating varied characters with almost oxymoronic personalities, I didn’t particularly like the casual fat shaming mentioned throughout. I think perhaps this was intended by Reid to portray the white characters in a certain way, it just didn’t sit right with me given the overall point of the book, however it wasn’t enough to make me change my opinion of the novel, I think it just needed a little more consideration.

When babysitter Emira Tucker is called late one night by the white family (the Chamberlains) she sits for, she needs the money and so goes to their house. Alix and Peter Chamberlain asks her to take Briar, their daughter, to the store round the corner while they deal with something at home. While there, Emira is stopped by a security guard who accuses her of kidnapping Briar. On finding out what happened, the Chamberlains become determined to set things right – but how good are their intentions really?