About the Book
But beneath the school runs and bake sales, Vicky had never quite said goodbye to the past. So, when a newcomer on the PTA sets alarms bells ringing and MI5 comes calling, she’s determined to prove that despite her expanding waistline and love of pink gin, she’s still every bit the cold-eyed special operative.
2. What inspired the book?
5. What do you do when you aren’t writing? What do you do to relax and get away from it all?
Vicky Turnbull has never regretted giving up her career for family life in the suburbs. And apart from being outstandingly good at paintball, no one would ever know that in a past life she was an undercover spy and has been trained to kill a man with her bare hands. Not even her husband, and certainly not the other mums at the school gate.
Tinker, Tailor, Schoolmum, Spy is the story of Vicky Turnbull, a middle-aged mother of three who’s recalled to her former life as a spy. It’s a bit of comedy, action and thriller all rolled into one, with deeper themes that many women will be familiar with, of parenting, relationships, returning to work and the ‘having it all’ conundrum.
7. I like to end my Q&As with the same question so here we go. During all the Q&As and interviews you’ve done what question have you not been asked that you wish had been asked – and what’s the answer?
A couple of things: firstly, I love to work and have a career, and it’s the one thing about being the primary carer for my son that I find frustrating, in that it’s very hard to put yourself first, or even second, or even before the cats sometimes. And going back to work is very hard, especially after time out to have kids. I know loads of women who tried but then retrained or started their own business, because it was easier than ‘going back’. I thought this would be interesting to explore. Secondly, I always thought I’d have made a great spy. I don’t know why, but I trained in stage firearms at drama school and had a thing about helicopters for a while, so it’s always been there as a dream, to be the next James Bond. The great thing about being a writer is you can be whoever you want to be. So I combined the two ideas and came up with the book. 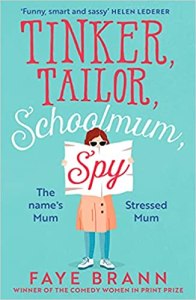 No one has asked me who I’d like to see playing my characters if the book was made into a movie. If we’re talking full on Hollywood A-list, I’d love Vicky to be played by Kate Winslet, Matisse by Scarlett Johansson and, because I think with a couple of fake tattoos and a decent Russian accent, he might just be brilliant, Jason Bateman as Sacha.
3. Are you a plan, plan, plan writer or do you sit down and see where the words take you?
4. Having been through the publishing process, is there anything about the process of creating a novel that surprised you?
1. Tell us a little about Tinker, Tailor, Schoolmum, Spy.
When the assignment gets uncomfortably close to home, Vicky must decide if she has got what the job takes after all, and if home is really where her heart is…
Faye Brann is the author of Tinker, Tailor, Schoolmum, Spy which was published by Harper Collins on 2 September 2021.
I’m not sure what getting away from it all feels like anymore! Does running a taxi service for my son count? I love to travel and explore the world but it’s been hard the past few years. In the day to day, I belong to a musical theatre company, so in normal times I’d be on stage singing and dancing – but again it’s been a very difficult time to do this, although we’re getting back in the room again now.
I don’t know. Maybe Hitchhiker’s Guide to the Galaxy. My guilty pleasure is sci fi fantasy, I love it when you’re transported to another world, literally. Actually, the book I’ve read most that still sits on my shelf is The Crystal Singer by Anne McCaffrey. So probably one of those two.
The amount of work you have to put in after it’s published! I was aware that authors do a lot of their own publicity, but I hadn’t really thought about what that would mean before I started. You really do have to weed out opportunities for yourself, but at the same time, remain fairly disciplined about how much time you’re taking away from writing. It’s a balancing act I don’t think I’ve got quite right yet, if my word count is anything to go by.
Horribly unplanned. Sometimes it goes horribly wrong as a result! But I find the spontaneity of writing freeform much more pleasurable than planning a story to within an inch of its life. It doesn’t make writing synopsis or pitching a book very easy though. I sometimes wish I was better at planning because of that.
6. If you could only read one book for the rest of your life which book would it be?
Faye answered a few of my questions.