When her friend Isobel suggested she take on a new job in their tiny rural community, she didn’t expect to fall in love.
About the Book
Two marriages, a bucket full of dreams and a pile of broken hearts.
7. I like to end my Q&As with the same question so here we go. During all the Q&As and interviews you’ve done what question have you not been asked that you wish had been asked – and what’s the answer?
Jinny kindly answered a few of my questions.
Even if I try to plan, I never stick to the plan. I’ll print out a chapter to work on, make a few notes or annotations, then ignore the notes while I bash completely different amendments into the computer.
1. Tell us a little about Dear Isobel.
Get away from it all? (*insert ironic laugh here) I’m doing a Creative Writing MA to ‘get away from writing’. But in not-writing – my immediate day-to-day get away is to take the dogs for a walk. If I’m struggling with something, or have reached a block, I walk. We live very rurally, so I’ve endless country roads to trek. I get some of my best ideas when I’m out with the dogs, and occasionally I even still remember them once I get home. In the bigger scheme of things, pandemic notwithstanding, I’d be travelling. I long to go back to Norway next.
4. Having been through the process, was there anything about the process of publishing a book that surprised you?
2. What inspired the book?
It’s been described as ‘raw’ and ‘soul-baringly honest’ by many early readers. Early readers also said they both recognised and resonated with all four main characters, supporting the evidence that the situation relayed is a common occurrence, although one beta reader also berated the narrator as ‘deeply dislikeable and egotistical’ – a description I love!
3. Are you a plan, plan, plan writer or do you sit down and see where the words take you?
Once, she had it all: a supportive husband, lovely children, and a prestigious career revitalising failing businesses in the wake of Ireland’s recession.
Jinny Alexander’s book, Dear Isobel, was published on 14 March 2022.
Now she has become the other woman, the marriage wrecker, the cheat, and the betrayer.
Will talking to Isobel help pick up the pieces or shatter their lives forever?
It’s a very stop-start process and I had no idea how long the process would take, or why it takes so long. I’m with a small publisher, which brings its own special set of swings and roundabouts. One of the biggest thrills for me was that I got to suggest my own idea for the book cover, and my publisher agreed with my vision. I’m delighted that Dear Isobel will now feature a friend of a friend’s photography on the cover. I know that many with the bigger publishers don’t get to have any input into how their covers look. However, I suspect I’ll have to work far harder at promotion than those with the big guys behind them, which is one of the downsides.
5. What do you do when you aren’t writing? What do you do to relax and get away from it all?
When the illicit relationship ends, she’s stuck between the ruined affair and a crumbling marriage. Jobless and bereft, she must try to salvage what remains.
6. If you could only read one book for the rest of your life which book would it be?
My current work-in-progress (another standalone) is a mix of both. I’ve planned out the vaguest of outlines, made a map, and sketched out a few brief character profiles which I’ll build on as I write.
When I first started writing Dear Isobel, I was going through my own difficult time so some of the angst in it is my own, but at that same time, I became aware that a couple of people I knew well were involved in affairs, and as I started to listen to their stories, I realised how common this is, and how it can so easily happen to even the most ordinary people. The more I started looking, the more I saw. I read at the time that 1 in 4 people in long term relationships experience infidelity, and it seemed many of them lived in my village! I knew this was something that isn’t talked about openly enough, and Dear Isobel was born from seeing the anguish of not just those being cheated on, but also of those doing the cheating, which offered an interesting viewpoint to tell the story from.
She’s not sharing her name. She’s been judged enough. 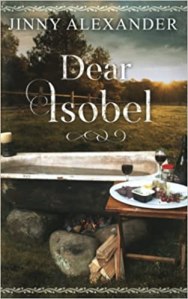 I really love to talk to people so even if I don’t get asked specific questions, I probably ramble on about all kinds of things I didn’t actually get asked! I’m forever going off tangent to talk about other stuff.
However, I’m also writing a cosy mystery series, and when I started book 2 for that series, I realised planning is more crucial in a series. For my Jess O’Malley books, I now have vast files on each character, timelines, calendars and maps.
Dear Isobel tells the aftermath of the married narrator’s affair with her business partner, Charles. It includes flashback scenes that detail moments of the affair, and charts the narrator’s conflict between trying to ‘move on’ with not wanting to let go. It’s told partly in her letters and texts to Isobel, who used to be her friend, but is also Charles’s wife. The story is told entirely from the narrator’s point of view, and at times, it’s unclear how reliable her viewpoint is.
I absolutely adored Erin Morgenstern’s The Night Circus, and I imagine if I reread only this for the rest of my life I’d still find something new in it every time. I also recently listened to Abi Daré’s The Girl with the Louding Voice on Audible recently, and that would be the book I would only ever listen to if I had to choose.