For Rev Jack Brooks and teenage daughter Flo it’s supposed to be a fresh start. New job, new home. But, as Jack knows, the past isn’t easily forgotten.

What a story! I was hooked from page 1 and the pace didn’t let up until the very end. Jack’s one of those people who has to stick their nose into things and when you’re brand new to a place that doesn’t always go down well. The author really puts across those small village feelings of suspicion, misunderstandings and that sense of being an outsider. I guess a vicar is more used to getting stuck into new situations than most but it’s still quite a baptism of fire for Jack in more ways than one.
500 years ago: eight martyrs were burnt to death
30 years ago: two teenagers vanished without trace
Two months ago: the vicar committed suicide
Facebook
C. J. Tudor lives with her partner and young daughter. Her love of writing, especially the dark and macabre, started young. When her peers were reading Judy Blume, she was devouring Stephen King and James Herbert.
Over the years she has had a variety of jobs, including trainee reporter, radio scriptwriter, dog walker, voiceover artist, television presenter, copywriter and, now, author.
Reverend Jack Brooks has been banished to Chapel Croft to take up a new position as interim vicar. It’s a small village with a chequered history including people burnt as martyrs, missing girls and suicidal previous incumbents. Accompanied by teenager, Flo, Jack is eager to make the best of the new start but the past is still lingering and the residents of the village are not always the most welcoming.
Yet right away Jack has more frightening concerns.

Why is Flo plagued by visions of burning girls?
Who’s sending them sinister, threatening messages?
And why did no one mention that the last vicar killed himself?

And in a close-knit community where the residents seem as proud as they are haunted by Chapel Croft’s history, Jack must tread carefully. Ancient superstitions as well as a mistrust of outsiders will be hard to overcome.

The Burning Girls is an amazing read. It’s tense and atmospheric, exciting and addictive, mixing religion and folklore to create something really sinister and thrilling. I think this is my favourite by this author so far. I thought it was phenomenal.
My review today is of The Burning Girls by C.J. Tudor which is simply brilliant. My thanks to Jennifer Breslin from Michael Joseph for the proof copy of the book for review purposes.

Chapel Croft’s secrets lie deep and dark as the tomb. Jack wouldn’t touch them if not for Flo – anything to protect Flo.

But the past is catching up with Chapel Croft – and with Jack. For old ghosts with scores to settle will never rest . . .
I found Jack to be a really well-drawn character, one I really liked. Some of the story is also told from Flo’s viewpoint and so we get to see that parent/teenage child dynamic in action from both sides. There are a number of other characters who play their part in the story and I think I was suspicious of them all, wondering if they were really what they seemed. But even then, I never saw the twists and turns that hit me in the face as I tore through the pages. Wow and wow! What incredibly skilful plotting from C.J. Tudor. As I closed the book at the end I felt like I needed to go back and reassess everything I thought I knew.
Like Loading…

Her first novel, The Chalk Man, was a Sunday Times bestseller and sold in thirty-nine territories. 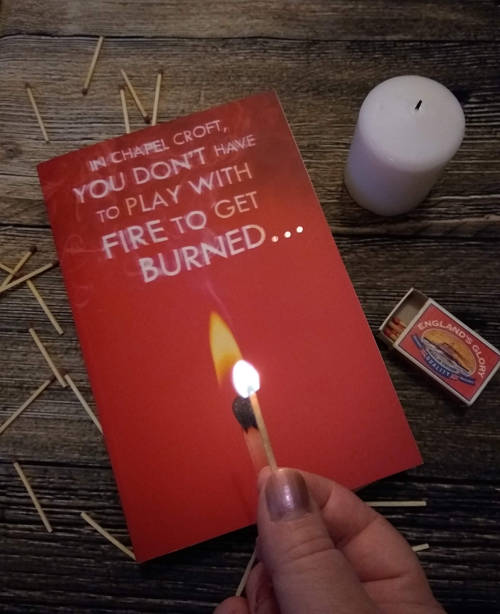 I finished The Burning Girls late one night in bed, which wasn’t the best idea, to be honest, as it’s a bit freaky at times, but I just couldn’t put it down. It’s so exciting, so compelling and so fast-paced.