Let Sandi Toksvig guide you on an eclectic meander through the calendar, illuminating neglected corners of history to tell tales of the fascinating figures you didn’t learn about at school.
Sandi Toksvig went into theatre as a writer and performer after graduating from Cambridge. Well known for her television and radio work as a presenter, writer and actor, she has written more than twenty books for children and adults. She also writes for theatre and television: her film The Man starred Stephen Fry and Zoe Wanamaker and her play Bully Boy starring Anthony Andrews opened the St James Theatre, London in 2012. She was Chancellor of Portsmouth University from 2012 to 2017. In 2016 Sandi took over as chair on QI, and in 2017 she started presenting The Great British Bake Off. She lives in London and Kent.
From revolutionary women to serial killers, pirate nuns to pioneering civil rights activists, doctors to dancing girls, artists to astronauts, these pages commemorate women from all around the world who were pushed to the margins of historical record. Amuse your bouche with:
I listened to the audiobook version of this and as you can imagine, it was a joy to listen to. Sandi Toksvig is very easy to listen to and brought the stories of the women to life with her charming way of relating each tale. I also enjoyed finding out about folklore from around the world associated with each month and listening out for the ‘tinkle’ that signified the poem of the month. Listening to the book at the start of the year, I was concerned to learn that January is the month I’d be most likely to be eaten by a wolf! Thankfully, there didn’t seem to be many around Portobello this year…
My thanks to the publishers Trapeze for my review copy of the audiobook through Netgalley. Toksvig’s Almanac 2021 is available now in ebook, hardback and audiobook editions. You’ll find buying options on the publisher’s website here: Toksvig’s Almanac
From the back of the book
As well as being very interesting and informative, the book is also, as you might expect given the author, very funny. Sandi Toksvig tells her stories with passion and wit and encourages the reader (or in my case the listener) to look further into each women’s story as she can only touch upon their lives in this book. You’ll find just a small selection listed in the information about the book below my review.
As witty and entertaining as it is instructive, Toksvig’s Almanac is an essential companion to each day of the year.
These stories are interspersed with helpful tips for the year, such as the month in which one is most likely to be eaten by a wolf, and the best time to sharpen your sickle. Explore a host of annual events worth travelling for, from the Olney Pancake Race in Wiltshire to the Danish Herring Festival, or who would want to miss Serbia’s World Testicle Cooking Championship?
Toksvig’s Almanac is a hugely entertaining journey through the year linking each date with women who should be familiar names but, in most cases, aren’t. As the author herself says, this book was always going to be incomplete as there are so many women whose stories remain untold. History generally remembers those who write it and that is usually men. Nevertheless, the book is bursting with fascinating stories of women from all over the world, from all walks of life and from many different periods of history.
‘Toksvig’s Almanac is intended merely as a starting point for your own discoveries. Find a fabulous (or infamous) woman mentioned and, please, go looking for more of her story. The names mentioned are merely temptations. Amuse-bouches for the mind, if you like. How I would have loved to have written out in detail each tale there is to be told, but then this book would have been too heavy to lift.’
Belle Star, American Bandit Queen
Lady Murasaki, author of the world’s first novel
Madame Ching, the most successful pirate of all time
Maud Wagner, the first female tattoo artist
Begum Samru, Indian dancer and ruler who led an army of mercenaries
Inês de Castro, crowned Queen Consort of Portugal six years after her death
Ida B. Wells, activist, suffragist, journalist and co-founder of the NAACP
Eleanor G. Holm, disqualified from the 1936 Berlin Olympics for drinking too much champagne
As a physical book, this would be great to dip in and out of. As an audiobook, I thoroughly enjoyed listening to a few days worth of stories at a time when I was out for a walk or in the car. Toksvig’s Almanac is a warm tribute to forgotten women, well written, clever and very amusing.
About the author 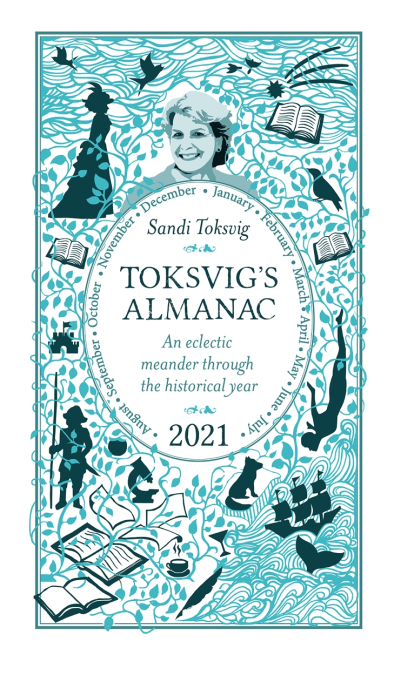