Throughout the Fairway Players’ staging of All My Sons and the charity appeal for little Poppy Reswick’s life-saving medical treatment, the murderer hid in plain sight. Yet we believe they gave themselves away. In writing. The evidence is all here, between the lines, waiting to be discovered.
Will you accept the challenge? Can you uncover the truth?
Someone has already been convicted of this brutal murder and is currently in prison, but we suspect they are innocent. What’s more, we believe far darker secrets have yet to be revealed. 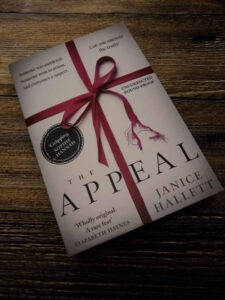 The Appeal is going to be a tricky book for me to review. I don’t want to give away anything that gives too much of an insight into the actual storyline or characters. It’s a small-town murder mystery based around two pivotal events: the amateur production of a play and the requirement of funds for a little girl’s potentially life-saving treatment.
Like Loading…
In a town full of secrets…
Someone was murdered.
Someone went to prison.
And everyone’s a suspect.
Can you uncover the truth?

Janice Hallett is a former magazine editor, award-winning journalist and government communications writer. She wrote articles and speeches for, among others, the Cabinet Office, Home Office and Department for International Development. Her enthusiasm for travel has taken her around the world several times, from Madagascar to the Galapagos, Guatemala to Zimbabwe, Japan, Russia and South Korea. A playwright and screenwriter, she penned the feminist Shakespearean stage comedy NetherBard and co-wrote the feature film Retreat, a psychological thriller starring Cillian Murphy, Thandie Newton and Jamie Bell. The Appeal is her first novel.
The standout debut thriller of 2021 that delivers multiple brilliant twists, and will change the way you think about the modern crime novel.
What’s so innovative about this story is it’s told almost completely in emails and messages. I must admit to being simultaneously intrigued and wary of this format as I don’t always get on with epistolary novels, but I needn’t have worried. Hallett has made this such an addictive read with a feeling akin to peeping through a window and observing the (pretty unlikeable, to be fair) characters’ behaviour both first- and second-hand, and watching their stories unfold.
In The Appeal nothing and nobody is what they seem. Even the title surprised me as it has more than one meaning. I have come to the conclusion I would be a terrible detective and am hopeless at reading between the lines. Janice Hallett, however, is a masterful plotter, pulling all of the different strands together with aplomb. It gives me a headache just thinking about the planning of this novel. This is an accomplished debut novel and a compelling mystery, with a very original style. I loved it.

Dear Reader – enclosed are all the documents you need to solve a case. It starts with the arrival of two mysterious newcomers to the small town of Lockwood, and ends with a tragic death.
Twitter

My review today is of The Appeal by Janice Hallett. My thanks to the fantastic Viper Books for the proof copy of the book for review purposes. It will be published in ebook and hardcover tomorrow.

Through the various correspondence devices we learn how each character feels about the others and about the situations they find themselves in. We also learn the reason for the correspondence being collated and its relevance. We get to see it dissected and at this point the pace slows down somewhat, requiring a more considered, yet still fascinating, read.