Faced with an empty nest when her only child goes to university, the flaws in Grace’s marriage are sharply exposed. Finding excuses to escape the taut atmosphere at home, she is drawn into an affair that ignites a mid-life sexual awakening.

A stale marriage, an illicit affair. Who pays the price?
When one of the characters said they were studying anthropology I thought to myself that that was what I was doing, studying all of human behaviour perfectly portrayed between the covers of this book. There’s Grace’s empty nest, Cal’s disdain and lack of respect for her feelings, and then the affair that is a reawakening for Grace, giving her the knowledge that there’s so much more for her. Then there’s Cal’s older children who’ve never been able to quite accept Grace as a stepmother, and Grace’s friend Christina, who seems like a rock but has her own stuff going on.
This book had me smiling a lot because the characters are such brilliant creations and their dialogue just perfect. I was swept along with Grace through the highs and lows, from the heady thrills to the terrible consequences, feeling in turns thrilled and horrified for what Grace was going through. Throughout it all though, I just absolutely loved her as a character.

This is a fantastic real life depiction of marriage, family and adulthood (and fishing!). I thought it was superb and I wouldn’t hesitate to pick up another book by Colette Dartford.

Colette Dartford writes contemporary fiction with compelling emotional themes. Her debut novel, Learning to Speak American, was shortlisted for the Amazon Breakthrough Novel Award and published by Bonnier Zaffre. Her second novel, An Unsuitable Marriage, was a Kindle bestseller for over 18 months. In addition to her novels, Colette has had award-winning Flash fiction, short stories and poetry, published in popular magazines and anthologies. The Mortification of Grace Wheeler is her third novel. Colette lives in Bath with her husband and a very demanding labradoodle.
The book starts with Grace about to wave goodbye to her son as he goes to university. Faced with the prospect of her empty nest, her life consisting of just her and her much older husband, Cal, she feels cast adrift and dissatisfied with what she has left. Maybe entering into an affair with a hunky younger man seems almost a cliché but for Grace it’s the catalyst for a change in her whole life. Whilst her actions sometimes felt a bit selfish they were also understandable given her frustrations. Nothing is ever really as cut and dried as it seems, is it?

A compelling and emotional read, The Mortification of Grace Wheeler shines a spotlight on a marriage in crisis, the challenges of being a middle-aged woman, and the fear that your best years are behind you.

But when her secret is discovered there is a terrible price to pay, and Grace is not the only one who pays it. 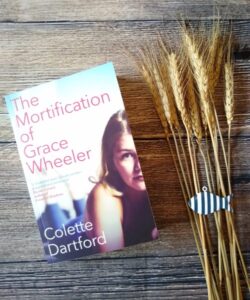 I’m not entirely sure I knew exactly what kind of book I expected The Mortification of Grace Wheeler to be but having now finished it I can tell you that it was a book that hooked me immediately and which I didn’t want to put down. I’ve rarely read a book so quickly.

The Mortification of Grace Wheeler by Colette Dartford is published by Whitefox Publishing today in paperback and eBook. Congratulations, Colette! My thanks to Becky Hunter from Midas PR for sending me a proof copy for review.