I want to end with my favourite quote from the book:
The ultimate American dream, Shoe Dog is a real-life story of passion, perseverance, belief, loyalty and teamwork with a lot of heart. A brilliant book that I would recommend to absolutely anyone, Shoe Dog is a stunning exploration of the power of persistence, of hard work, of dreams and of opportunity. Inspiring, insightful and stirring, I will remember the story for a long time.

There was so much I loved about Shoe Dog; I loved the colourful cast of characters, all of whom were key factors in creating the brand – I loved Johnson – Nike’s first salesman – who was as eager as he was dedicated, and who not only showed perseverance like no other, but who also proposed the name Nike after the Greek winged goddess of Victory came to him in a dream. I loved Bowerman; the American track and field coach who became a co-founder of Nike after he entered into a handshake agreement. I loved the innately human nature of the story, and I tore through the book so I could read about the brand’s near bankruptcy, the ample money borrowed and begged, the entirely empty bank balances – all but entirely unimaginable for a brand that is such a household name. I adored reading about Knight’s relentless work ethic, the ways in which he begged, borrowed and pleaded, and worked round the clock with a team that became family, knowing that their vision and their dream was a worthwhile one.
Split into chapters titled with the year in which the chapter is set, Shoe Dog is an intimate and insightful look at what used to be known as Blue Ribbon Sports grew into one of the most widely recognised brands in the world. We learn about the trip that Knight took around the world with his school friend Carter, the featured an extended stay in Hawaii, before taking in the sights of Asia and Europe. We learn that Knight has a background in accounting; that he worked at PWC to fund the start of his business; that he met his wife while teaching at Portland State (after leaving PWC to buy himself more time to work on building his entrepreneurial endeavour).
There are many books that I know I’m going to love, prior to even starting them. I love books that are laced with heartache; I adore most literature that has a house at its centre; gothic fiction is a genre I love and whose novels I read time and time again without ever getting bored. Most books set in France usually have me hooked, and whenever I read a memoir, it usually ranks among my favourite books. Loved Shoe Dog by Phil Knight but not sure what to read next? Here are 5 books similar to Shoe Dog.
As soon as I started Shoe Dog however, despite my reservations, I found it almost impossible to put down. A memoir about the strifes and the struggles of Phil Knight as he worked relentlessly to build Nike into the power force that it is today, Shoe Dog is a fast-paced an unputdownable tale that breathes life into a brand that today is known and loved for being at the core of both sporting and popular culture.
In 1962, fresh out of business school, Phil Knight borrowed from his father and created a company with a simple mission: import high-quality, low-cost athletic shoes from Japan. Selling the shoes from the trunk of his lime green Plymouth Valiant, Knight grossed ,000 his first year. Today, Nike’s annual sales top billion. In an age of startups, Nike is the ne plus ultra of all startups, and the swoosh has become a revolutionary, globe-spanning icon, one of the most ubiquitous and recognizable symbols in the world today.
And while Shoe Dog by Phil Knight is, essentially, a memoir, it too is heralded by many as a business book, and thus, when combined with its front cover and subject matter – the birth, and subsequential growth – of Nike, I didn’t have particularly high expectations – despite it having been recommended to me by a number of people over the past few years.

Like books, sports give people a sense of having lived other lives, of taking part in other people’s victories. And defeats. When sports are at their best, the spirit of the fan merges with the spirit of the athlete, and in that convergence, in that transference, is the oneness that mystics talk about.
But Knight, the man behind the swoosh, has always remained a mystery. Now, for the first time, in a memoir that is candid, humble, gutsy, and wry, he tells his story, beginning with his crossroads moment. At 24, after backpacking around the world, he decided to take the unconventional path, to start his own business—a business that would be dynamic, different.
Knight details the many risks and daunting setbacks that stood between him and his dream—along with his early triumphs. Above all, he recalls the formative relationships with his first partners and employees, a ragtag group of misfits and seekers who became a tight-knit band of brothers. Together, harnessing the transcendent power of a shared mission, and a deep belief in the spirit of sport, they built a brand that changed everything. 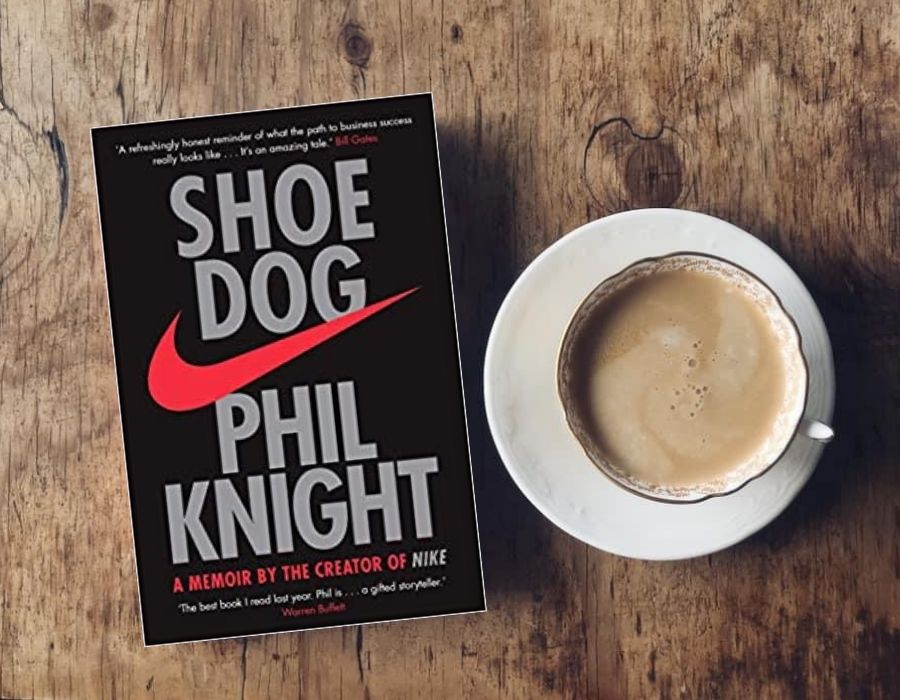 Philip Hampson Knight, whose nickname is “Buck”, is an American businessman and philanthropist. He is the co-founder and current chairman emeritus of Nike, Inc., and previously served as chairman and CEO of the company.

In this candid and riveting memoir, for the first time ever, Nike founder and CEO Phil Knight shares the inside story of the company’s early days as an intrepid start-up and its evolution into one of the world’s most iconic, game-changing, and profitable brands.
I cried twice during Shoe Dog. Knowing almost nothing about the man behind the brand, I didn’t know his beloved son Matthew had died in a scuba diving accident in 2004, aged just 34, and I found the way Knight wrote about his untimely passing both devasting and deeply moving. And at the end of the book, the way Knight wrote about his wife, Penny, how the waiting and the ups and the downs and the late nights and long days were all ultimately, finally worth it.