Last One at the Party is currently 99p in ebook format on Amazon.
Bethany Clift is a graduate of the Northern Film School, the producer of low-budget British horror film Heretic, and the Director of her own production company, Saber Productions. Last One At The Party is her debut novel.
Bethany kindly answered a few of my questions.
1. Tell us a little about Last One at the Party.
But somehow, in London, one woman is still alive. A woman who has spent her whole life compromising what she wants, hiding how she feels and desperately trying to fit in. A woman who is entirely unprepared to face a future on her own.
And then I thought, what if I wasn’t just the only one here? What if the reason it was so quiet was that I was the only one anywhere; that I was the only one left alive in the whole world. What would I do next?
Unfortunately, I am not a planner! I have try very hard to be though! Every time I start a novel I plaster my entire kitchen wall in coloured cards, breaking the narrative down beat by beat, chapter by chapter; the cards stay on the wall for the whole writing process and I probably look at them twice – once when I put them up and once when I took them down! Some novelists are able to plan a novel for months before writing a word and can then write the novel straight through following the plan. Unfortunately, that is not me. I write around my characters and situations and need to write about them for them to become fully formed. So, for LOATP was originally around 800 pages, only 300 of which made the final cut. I am currently writing my second novel and have already discarded around 200 pages. It makes me feel slightly faint looking at the number but I have come to realise that is my process, my characters develop as I write them and get to know them. Unfortunately, there is no short cut! 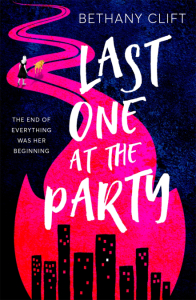 It’s December 2023 and the world as we know it has ended.

The human race has been wiped out by a virus called 6DM (‘Six Days Maximum’ – the longest you’ve got before your body destroys itself).
But somehow, in London, one woman is still alive. A woman who has spent her whole life compromising what she wants, hiding how she feels and desperately trying to fit in. A woman who is entirely unprepared to face a future on her own.
I have two kids so mostly I just try and sleep! Joke (sort of!). In fact, in complete contrast to the lead character in my novel I am incredibly practical and very much an outdoorsman! I love anything that is outside and in nature. I love camping and can build a good campfire within a couple of minutes. I love gardening and growing things and digging in mud with my hands! I hardly ever wear gardening gloves so am forever scrubbing at my dirty nails.