This morning I received your dear, dear letter of the 21st. How happy do you make me with your love! Oh! my Angel Albert, I am quite enchanted with it! I do not deserve such love! Never, never did I think I could be loved so much. Queen Victoria to Prince Albert (28 November 1839)

Tender, moving, heartfelt and warm (and sporadically scandalous and outrageous too), these are the private messages between people in love. Yet they are also correspondence between the rulers of nations.

From Henry VIII’s lovelorn notes to Anne Boleyn and George IV’s impassioned notes to his secret wife, to Queen Victoria’s tender letters to Prince Albert and Edward VIII’s extraordinary correspondence with Wallis Simpson – these letters depict romantic love from its budding passion to the comfort and understanding of a long union (and occasionally beyond to resentment and recrimination), all set against the background of great affairs of state, wars and the strictures of royal duty.

Today I’m sharing my thoughts about Love Letters of Kings and Queens, edited by Daniel Smith. My thanks to Elizabeth Masters of Greenfinch for sending me a copy of the book for review purposes. 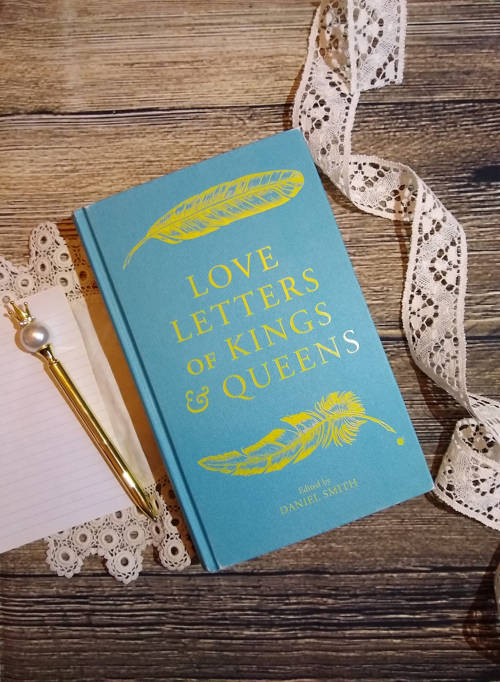 This book, expertly edited by Daniel Smith, takes us on a journey through royal love letters. Beginning with Edward II and Isabella of France in 1325, and ending with Edward VIII and Wallis Simpson in 1937, this is a fascinating look at how some of the most well known Kings and Queens communicated with each other.
Each section has a brief biography of the main players, followed by a selection of their letters. It’s quite illuminating to bear witness to some of the most interesting matches in history, even if some of them were not exactly love matches. Indeed, upon the death of Mary I, her husband, Philip II of Spain, commented to his sister that he “felt a reasonable regret for her death”. Well, if that’s not true love then I don’t know what is!
Website
Of course, one of the most famous royal relationships was that of Queen Victoria and Prince Albert. She never got over his premature death and it was very moving to read of her agonising cry of “Oh, My dear Darling!” as he passed away.
Like Loading…

Daniel Smith lives in London and is the author of over thirty books on subjects as diverse as Sherlock Holmes, the Second World War ‘Dig for Victory’ campaign, serendipity and money. His narrative non-fiction includes ‘The Peer and the Gangster’ and ‘The Ardlamont Mystery’. He has also written twelve titles in Michael O’Mara’s How to Think Like… series, as well as a series of books for Quercus (100 Places You Will Never Visit/Things You Will Never Do/Things You Will Never Find/Things They Don’t Want You to Know). He is also a long-time contributor to The Statesman’s Yearbook, a geo-political guide to the world.

Here is a chance to glimpse behind the pomp and ceremony, the carefully curated images of royal splendour and decorum, to see the passions, hopes, jealousies and loneliness of kings and queens throughout history. By turns tender, moving, heartfelt and warm (and sporadically scandalous and outrageous too), these are the private messages between people in love. Yet they are also correspondence between the rulers of nations, whose actions (and passions) changed the course of history, for good and bad.
Twitter
Perhaps the most intriguing for me were the letters between Edward and Mrs Simpson. History has her pegged as a wicked woman who stole our king but her letters perhaps show us a alternate viewpoint. Either way, I enjoyed reading their missives and the little quirks in the way they addressed and wrote to each other.

Love Letters of Kings and Queens is a real treat for any royalist and anyone who enjoys reading historical letters, and it’s the ideal book to dip in and out of.