If you’re tempted at all, The Club is currently only 99p to download on Amazon UK – an absolute steal for such a great read.ABOUT THE AUTHOREllery Lloyd is the pseudonym for London-based husband-and-wife writing team Collette Lyons and Paul Vlitos. Collette is a journalist and editor, and former features editor at Stylist, content director of Elle and editorial director at Soho House. She has written for the Guardian, the Telegraph, and the Sunday Times as well as two travel books. Paul is the author of Welcome to the Working Week and Every Day is Like Sunday. He is subject leader for English Literature, Film, and Creative Writing at the University of  Surrey.But as the first guests arrive, the weekend soon proves deadly – because it turns out that even the most beautiful people can keep the ugliest secrets and, in a world where reputation is everything, they’ll do anything to keep it.Website | Twitter | Facebook | Instagram | Goodreads | Amazon UK 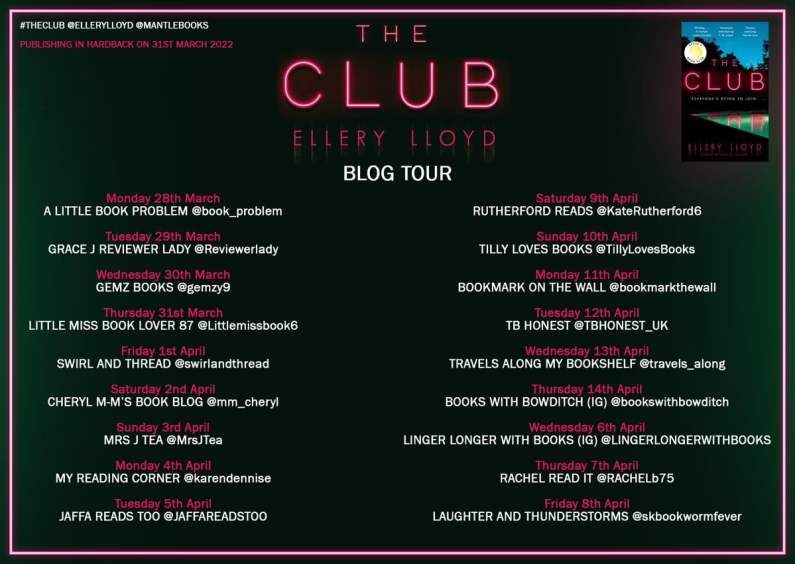 This was one of those reads that I was addicted to and picked up at every opportunity. There were so many flawed characters, particularly those who abused the celebrity status for their own advantage and so few to feel sympathy for. It was clear from the off that this was going to be a weekend of deathly shenanigans. Mobiles were confiscated on arrival, the exception being a very few select staff, the idea being that the celebs could relax without worry that their partying and antics would be released to the media.
“It was the club you’d kill to join, the launch event to which the A-list were dying to be invited”
It’s no spoiler to say the bodies start to appear from the very beginning and with detailed events being told retrospectively by instalments of a Vanity Fair article ‘Murder on the Island‘ combined with dated chapters told from various perspectives, the revelations and surprises bring together a cleverly plotted story. The further on I read, the more of the little details I remembered that seemed insignificant at the time but which allowed the story to fall into place. The relationship between the two Groom brothers was an interesting one, volatile CEO Ned was clearly the driving force of Home with his younger brother Adam desperate to show what he was capable of and come out from under Ned’s coat-tails.
The setting is an island off the Blackwater Estuary in Essex, accessed only by boat and at certain times by a causeway, dependent on tides. From a derelict island, the current owner Ned Groom and his brother Adam have created another addition to their ‘Home’ empire – a worldwide collection of luxurious member only clubs where you have to be a certain level of celebrity to even be allowed through the door. 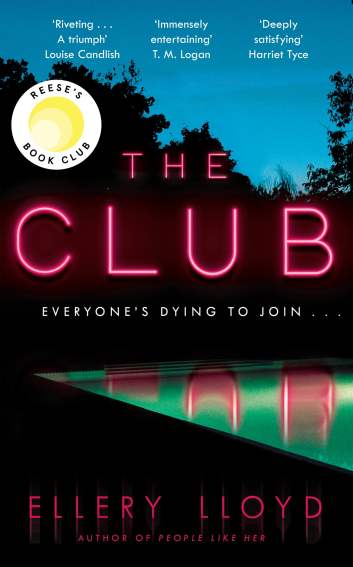 Follow the author:
It’s the launch weekend for Island Home and no expense has been spared in the creation of this latest venture – the unique feature of this club was the underwater restaurant, the Poseidon. Celebrities are arriving with their designer luggage and outrageous demands and the scene is set for an event that will have everyone talking. Well it certainly did, but not for the right reasons.
THE CLUB is their second novel, their debut was People Like Her.
Welcome to the launch event of the year. However if you knew what was in store, I’m not sure that you want to be invited.

MY THOUGHTS
*** A Reese Witherspoon Book Club Pick and an instant New York Times bestseller ***
** Optioned for TV by a major production company ** I thoroughly enjoyed this. It was entertaining with a steady pace, and with an undercurrent of secrets and revenge there were plenty of surprises with characters that you just loved to hate whilst hoping they would get their comeuppance. Whilst reading this, there was a song that came to mind, Hotel California – you know the one, you can check out but you can never leave. The Club is definitely one to recommend.
The Home Group is a collection of ultra-exclusive private members’ clubs and a global phenomenon, and the opening of its most ambitious project yet – Island Home, a forgotten island transformed into the height of luxury – is billed as the celebrity event of the decade.