When Miss Marchrose is employed as the new Lady Superintendent at the College patronised by Sir Julian Rossiter, Lady Rossiter’s ears soon prick up. She recalls that a Miss Marchrose unceremoniously reneged on a promise of marriage to her cousin when he fell ill. Tensions mount when Edna Rossiter decides it’s her role to let everyone else know the truth about the character of Miss Marchrose.
An entertaining read that also perhaps ignites a rage at the treatment of women deemed to have been morally wrong, it left me with a relief that society has come on some since then. And a relief that I didn’t know Lady Rossiter.
Published by British Library Publishing
Publication date – 13 May 2021
Tension examines reputation and the persistence of gossip in relation to a woman’s choice of work and domestic arrangements with a light touch of humour. The two main female characters represent the different roles of women in public life: Lady Rossiter uses her social position to influence college matters, while Miss Marchrose is a professional woman who brings qualifications and experience to her role.
“I know that things of that kind always are known, and the people I’ve been thrown with, sooner or later, always turned out to have heard the story. Or if they hadn’t,” said Miss Marchrose in a voice of calm despair, “someone took the trouble to tell them.”
There is nothing kind about her treatment of “poor Miss Marchrose”. Perhaps her actions went against Edna’s romantic ideals, given she settled for Sir Julian and a loveless marriage. Perhaps she feels her position is threatened, as Miss Marchrose begins to make favourable impressions on the college members. She is also no doubt jealous of Miss Marchrose’s relationship with Mark Easter. Edna’s attachment to him, though hidden perhaps from herself, is based on more than philanthropism. It would seem to the reader that she dislikes Miss Marchrose more, and speeds up her whispering campaign, the closer the younger woman gets to the handsome and easy -going (and married) Mark. Said with benevolence and “I really shouldn’t say only” Edna’s whisper campaign is only a success because of society being far more entertained and intrigued at watching someone’s fall rather than their rise.
The Women Writers series is fast becoming a firm favourite. There are so many women writers from the last century that had fallen out of favour or simply been left behind. It is wonderful to know that with the reissuing of their novels a new audience can discover some perhaps long forgotten entertaining tales.
The men at the college seem quick to allow blame to be passed onto Miss Marchrose, except Fairfax Fuller and to a lesser degree Sir Julian. Fairfax, hardly verbose at the best of times, finds his voice in defending Miss Marchrose. Julian tries to cheer up Miss Marchrose when he finds her brow beaten but does nothing to curtail his wife’s endevour and indeed is a little disappointed that Pauline Marchrose doesn’t put up more of a fight, which leaves the reader more than a little disappointed in him.
Edna is perhaps all the more cruel and vindictive as she repeatedly hides behind her maxim “Is it kind, is it wise, is it true?” She believes she is being kind, with her little nature classes to the “lower orders” who work at the college. She believes it’s wise to let everyone know about the nature of Miss Marchrose. She believes it to be true that it is Miss Marchrose who is fault for the breaking of an engagement and for getting too close to a married man. At no time does she, or any other person, feel that it is in any way the man’s fault.
Tension is part of a curated collection of forgotten works by early to mid-century women writers. The best middlebrow fiction from the 1910s to the 1960s, offering escapism, popular appeal and plenty of period detail to amuse, surprise and inform.
First published in 1920, Tension is a fascinating insight into the social norms of the time. A drawing room comedy of manners (or lack thereof), it shows that whilst there were social constraints for women still in place, there was also an awareness of the inequality and that change would perhaps be afoot).
Source – review copy
Miss Marchrose is about to discover that she cannot escape her past when she takes up a new position at a secretarial college in the south west of England. Following insinuations dropped by the director’s wife, she becomes the subject of a whispering campaign which threatens her professional career and personal happiness. 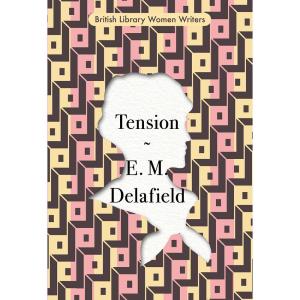 Tension is also a damning indictment on how women were perceived and treated in the early part of the 20th Century, and also perhaps how the treatment of Miss Marchrose is still echoed in some respects today. It is she who is made the pariah, who is deemed to be at fault, firstly for breaking off an engagement to a man who was ill and then for becoming close to a man who though without a wife at home was still legally married. The men escape with their dignity and reputation still intact.