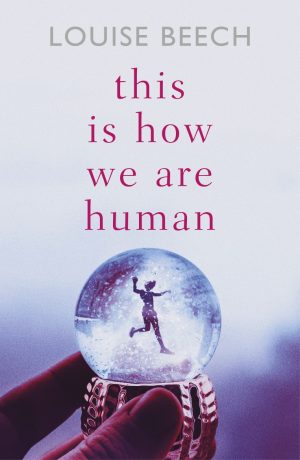 AUTHOR LINKS:
‘It wouldn’t be like that,’ snaps Veronica.
‘Right, I think we’re done here.’ Veronica stands, flicks her scarf back around her neck, and gathers her bag from the floor.
Now spit it out, she thinks.
‘Twenty.’
“Though This is How We Are Human is fiction, the premise was inspired by my friends, 20-year-old Sean, who is autistic, and his mum Fiona. Fiona had spoken to me about how much Sean longed to meet a girl and have sex. No one talks about this, she said- the difficulties navigating romance often faced by those on the spectrum. It’s an issue that I wanted to explore. Fiona and Sean encouraged me and guided me through the book; Sean regularly consulted on dialogue, rightly insisting that his voice was heard, was strong, and was accurate. I cannot thank my extraordinary friends enough for their help and support.” Louise Beech‘I’ve been thinking,’ she says, ‘that there is an answer. A way. I could just pack and we go to Amsterdam and I take him to a … well, a professional person. You know – a woman of the night. Someone who can meet his needs. A topical and moving drama about a mother’s love for her son, about getting it wrong when we think we know what’s best, about the lengths we go to care for family … to survive … This Is How We Are Human is a searching, rich and thought-provoking novel with an emotional core that will warm and break your heart.
‘Maybe he’s not emotionally ready to be having sex.’
‘I have to tell you,’ says Mel, ‘that if you do take him to a prostitute, then I’m obliged to inform the social-services team. I have to safeguard a vulnerable adult.’
‘Perhaps if he was emotionally ready, he would have found somebody.’
‘Who?’ asks Mel.
A NOTE FROM THE AUTHOR:
‘They need reprimanding.’
‘I could refer you to somebody,’ says Mel, coolly.
‘Have you any idea how to deal with human people, never mind autistic people?’ she asks softly. ‘Or is everything you know something you’ve read in a book?’
‘Then I’m telling you nothing!’
‘It isn’t the only time. Some of the boys on his course, they tease him. They know he hasn’t had sex. I only know because his tutor told me. Sebastian didn’t. But he…’ Veronica’s voice wavers. ‘He denied it when I talked to him. The other night he said that if he doesn’t meet a girl, he might die.’
Violetta is a high-class escort, who steps out into the night thinking only of money. Of her nursing degree. Paying for her dad’s care. Getting through the dark.
VERONICA SPITS IT OUT
‘You don’t understand. I feel helpless. I can’t bear his distress. He hasn’t shown it here, today, but I see it. Every day, asking when will he have sex. Asking why doesn’t anyone like him. Can you imagine how that makes me feel? If I could just … make him happy. I’ve always been able to do that. But this … how can I?’
Veronica wants her son Sebastian to be happy … she wants the world to accept him for who he is. She is also thinking about paying a professional to give him what he desperately wants.
‘I’m not going back there,’ cries Veronica. ‘Why do I need to calm him down?’

Louise Beech is an exceptional literary talent, whose debut novel How To Be Brave was a Guardian Readers’ Choice for 2015. The follow-up, The Mountain in My Shoe was shortlisted for Not the Booker Prize. Both of her previous books Maria in the Moon and The Lion Tamer Who Lost were widely reviewed, critically acclaimed and number-one bestsellers on Kindle. The Lion Tamer Who Lost was shortlisted for the RNA Most Popular Romantic Novel Award in 2019. Her 2019 novel Call Me Star Girl won Best magazine Book of the Year, and was followed by I Am Dust.
When these three lives collide – intertwine in unexpected ways – everything changes. For everyone.
‘Maybe go back to your doctor – the answer might be medication.’
‘That’s terrible,’ says Mel kindly.
‘He wouldn’t tell me who they were.’

ABOUT THE AUTHOR
‘But still, you’re talking about going to Amsterdam and taking a vulnerable adult with special needs for a night in the red-light district?’
Publisher: Orenda Books
Format: Ebook, Audio and Paperback (10 June 2021)
300 pages
‘What would it be like?’
Veronica regrets sharing her idea. Faced with Sebastian’s bruised face, it came to her, a seemingly simple solution. She hasn’t really thought about the how. She hasn’t made actual plans. Now she feels ashamed. ‘I’m only thinking about it.’
‘Some kids on the bus. The other week. They weren’t from his college or I’d have had them expelled.’ Veronica closes her eyes and recalls the moment Sebastian walked through the door, jacket ripped and cheek bruised, still singing a Billy Ocean song. She tried to touch his face, tearful, demanding what on earth had happened. Sebastian shrugged and said he was OK. ‘They played a pornographic video on a phone and got him all wound up and then they laughed because he was aroused … and beat him up.’
Veronica is momentarily wordless. She imagines taking hold of Mel’s wooden beads and wrapping them tightly about her throat until she passes out and the patronising look on her face dies.
Veronica has to breathe deeply not to cry.
‘How old is he again?’
‘I don’t think legally that I can advise or recommend something like that.’
When the mother of an autistic young man hires a call girl to make him happy, three lives collide in unexpected and moving ways … changing everything. A devastatingly beautiful, rich and thought-provoking novel that will warm and break your heart…

EXTRACT
‘How the hell do you know what he’s emotionally ready for? I’m his mother and I know exactly what he’s ready for.’
‘No.’ Veronica controls her voice. ‘He is not a child.’

My thanks to Anne Cater of Random Things Tours for the tour invitation. It’s no secret that I am huge fan of Louise’s writing – all her previous books are reviewed on my blog. I have already reviewed This is How We Are Human a few weeks ago, you can read my review here. It really is a wonderful book and I’m delighted to have a place on the tour, this time with an extract.
‘No, I mean emotionally.’ Mel fiddles with her beads. ‘You said he’s more like a teenager, so I have to advise that this would be highly inappropriate.’
Sebastian James Murphy is twenty years, six months and two days old. He loves swimming, fried eggs and Billy Ocean. Sebastian is autistic. And lonely.

Mel looks expectantly at Veronica. Veronica realises it is time to say it. To spit it out. The thing she thought of the other night – alone, in tears, in her dark kitchen – but fears saying aloud. ‘They hurt him,’ she says first.