Like Loading…
But soon after the plane takes off, Mina receives a chilling anonymous note. Someone wants to make sure the plane never reaches its destination. They’re demanding her cooperation . . . and they know exactly how to get it.
The first direct flight from London to Sydney is about to take off, a 20 hour long journey with Mina as one of the cabin crew. She’s leaving behind her husband, Adam, from whom she is separated, and their 5 year old daughter, Sophia. Mina has a terrible decision to make when hijackers threaten to harm Sophia if she doesn’t do as they ask and allow them to take control of the plane. Mina’s story on-board Flight 79 is alternated with that of Adam and Sophia back home. They’re not simply sitting waiting for news and there’s a whole other thrilling subplot involving them.

Quite simply I thought this book was unputdownable. If it wasn’t for the fact that I was sensibly thinking about how I would feel the next day, I would have stayed up all night to finish it. That doesn’t happen to me very often. The situation on the flight is the stuff of nightmares, which the author goes to great pains in her Author Note to say is also extremely rare. I went through every emotion reading Hostage. I was on the edge of my seat with apprehension and adrenalin, sometimes feeling shocked, sometimes feeling hopeful for the characters. Tears sprang to my eyes at one point and my goodness, the ending was a turn up for the books. Clare Mackintosh is a very skilled writer and plotter, delivering unexpected twists and exciting events galore.

Clare Mackintosh is the multi-award winning author of four Sunday Times bestselling novels. Her first three novels were all Richard and Judy Book Club picks. Translated into forty languages, her books have sold more than two million copies worldwide, have been New York Times and international bestsellers and have spent a combined total of sixty weeks in the Sunday Times bestseller chart. Clare lives in North Wales with her husband and their three children.
Flight attendant Mina is trying to focus on the passengers, instead of her troubled five-year-old daughter back at home – or the cataclysmic problems in her marriage. 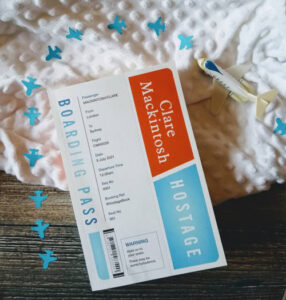 This book is absolutely INCREDIBLE! It’s incredibly gripping, incredibly brilliant and incredibly frightening.
The atmosphere on board the first non-stop flight from London to Sydney is electric. Celebrities are rumoured to be among the passengers in business class, and the world is watching the landmark journey.

I feel like Hostage is a brave thriller to write, playing on people’s worst fears, but my God, the author has pulled it off. She weaved in back stories for Mina and Adam which contributed to the story as a whole and created a brilliant character in Sophia, who has an attachment disorder and is super intelligent. With a plane full of passengers to love and to hate, a plot that blew me away, and a locked room setting that utterly thrilled me, this is most definitely one of my reads of the year.
Hostage by Clare Mackintosh was a book that had been on my radar for ages and I was thrilled to get my hands on a proof copy – thank you Kirsteen Astor at Sphere! I thought it was an absolutely amazing read and if you think it sounds brilliant too then it’s out today in hardcover, eBook and audiobook.

You can save hundreds of lives.
Or the one that matters most . . .