West Yorkshire, 1904. When newly graduated nurse Ruby May takes a position looking after the children of Charles and Lilian England, a wealthy couple from a powerful dynasty of mill owners, she hopes it will be the fresh start she needs. But as she adapts to life at the isolated Hardcastle House, it becomes clear there’s something not quite right about the beautiful, mysterious Mrs England.
Distant and withdrawn, Lilian shows little interest in her children or charming husband, and is far from the ‘angel of the house’ Ruby was expecting. As the warm, vivacious Charles welcomes Ruby into the family, a series of strange events forces her to question everything she thought she knew. Ostracised by the servants and feeling increasingly uneasy, Ruby must face her demons in order to prevent history from repeating itself. After all, there’s no such thing as the perfect family – and she should know.
Ruby May is a Norland children’s nurse. It’s 1904 so being a children’s nurse actually means being a nanny with a touch of governess thrown in. She’s happy with the London family whose young daughter she looks after but for personal reasons she has to leave them and find a new position. Enter the England family in West Yorkshire, a quite different prospect to what she is used to but Ruby is determined to fit in and look after their four children as she has been trained to do. However, there are disturbing things that she is unable to put her finger on at Hardcastle House. She hardly sees Mrs England who seems very remote and Mr England is everything Ruby does not expect from the man of the house and at times she feels quite uncomfortable in his presence.

Mrs England is a very atmospheric read full of intrigue and secrets, with a slow-burn tension that slowly rises to a crescendo at which point so many aspects of the story become clear as though a net curtain has been drawn back to reveal them. I love a character driven story and this is one that is very much about the different characters, from the upper classes to the servants, with Ruby sometimes in a limbo land between. I adored the upstairs downstairs vibe and I loved the quiet, yet plucky, Nurse May. 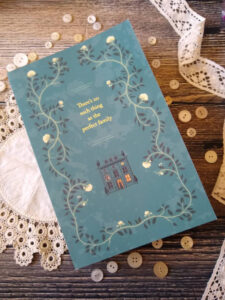 I’ve been highly anticipating Stacey Halls’ third book for what seems like ages and Mrs England proved to be the treat I was expecting it to be.
This is not a book where there are loads of twists and turns, and major events, more one that simmers nicely before coming to the boil. I loved the way in which I was able to follow Ruby in her work, understand what her role involved and really get a sense of her as a person. I particularly enjoyed understanding what was expected of her as a Norland nurse and also the workings of an Edwardian house. That’s not to say that there aren’t some thrilling events though. I was absolutely riveted by the narrative and by the underlying but all-pervading sense that there is something very wrong in the England household.
Simmering with slow-burning menace, Mrs England is a portrait of an Edwardian marriage, weaving an enthralling story of men and women, power and control, courage, truth and the very darkest deception. Set against the atmospheric West Yorkshire landscape, Stacey Halls’ third novel proves her one of the most exciting and compelling new storytellers of our times.
Like Loading… 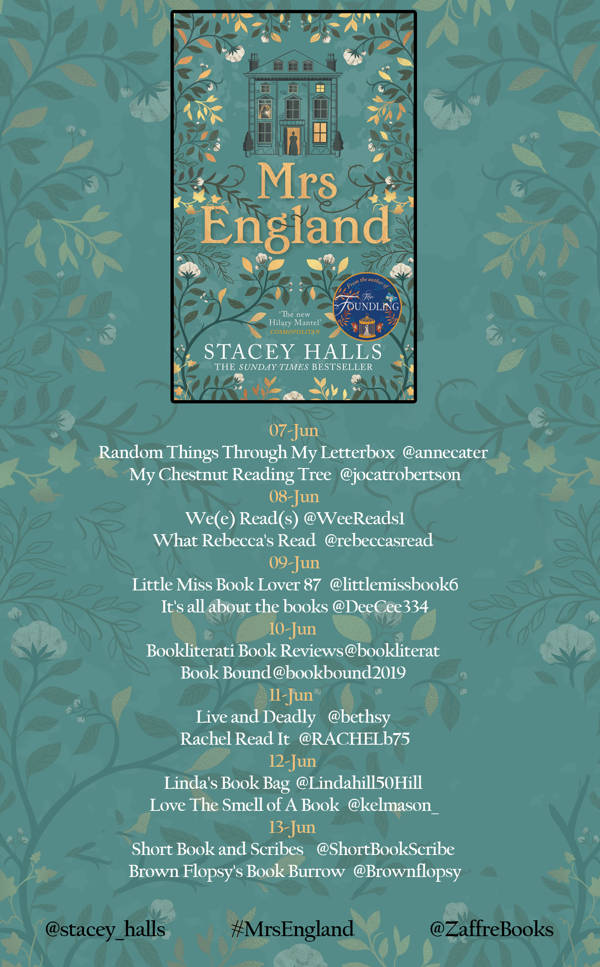 Stacey Halls was born in 1989 and grew up in Rossendale, Lancashire. She studied journalism at the University of Central Lancashire and has written for publications including the Guardian, Stylist,Psychologies, the Independent, the Sun and Fabulous. Her first book, The Familiars, was the bestselling debut hardback novel of 2019, won a Betty Trask Award and was shortlisted for the British Book Awards’ Debut Book of the Year.

It’s my stop on the blog tour for Mrs England by Stacey Halls today. What a fabulous book this is. My thanks to Manilla Press for the gorgeous proof copy for review purposes and to Tracy Fenton of Compulsive Readers for the place on the tour.

A gripping feminist mystery where a nanny must travel to a grand house filled with secrets. For there’s no such thing as the perfect family…

This is another brilliant, beautifully written and multi-layered book from the pen of Stacey Halls. I can’t wait to see what is next.

‘Something’s not right here.’
I was aware of Mr Booth’s eyes on me, and he seemed to hold his breath. ‘What do you mean?’
‘In the house. With the family.’