Holding Her Breath is a razor-sharp, moving and seriously entertaining novel about complicated love stories, ambition and grief – and a young woman coming fully into her powers.

Friendship is one of the strongest themes in this book, with old friends and new making a big impact on Beth’s life, along with family ties and first love. It turns into quite a tumultuous time for her. It’s been described as a coming-of-age story and I certainly think Beth goes through quite a transition and does some growing up along the way.

I found this quite an intriguing read. I guess it’s a slice-of-life story, one in which a 20 year old woman learns a lot about herself whilst also finding out more about her family background. It was the idea of discoveries in the archives which initially drew me to it and although it’s not a book with dramatic reveals, I enjoyed Beth’s quiet unearthing of the past. At the same time, she is having a secret relationship and I thought the author portrayed well the fact that Beth had her own secretive life whilst she delved into her family history. 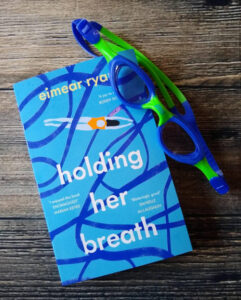 Holding Her Breath is both thoughtful and thought-provoking in many ways. Beth Crowe is a student, adjusting to her studies whilst trying to get back to the competitive swimming that she has been struggling with, but the major theme of the book is the spectre of the grandfather she never knew, Benjamin Crowe. Ben was a much lauded poet but not much talked about in Beth’s family so when she has the chance to view his archive through her grandmother, Lydia, and when she meets people who can tell her more about Ben or who share her interest, she finds a way of getting to know her grandfather.

Eimear Ryan’s writing has appeared in Granta, Winter Papers, The Dublin Review and The Stinging Fly. She is the 2021 Writer in Residence at University College Cork. She is a co-founder of the literary journal Banshee and its publishing imprint, Banshee Press. A native of Co. Tipperary, Eimear now lives in Cork city.

When Beth Crowe starts university, she is shadowed by the ghost of her potential as a competitive swimmer. Free to create a fresh identity for herself, she finds herself among people who adore the poetry of her grandfather, Benjamin Crowe, who died tragically before she was born. She embarks on a secret relationship – and on a quest to discover the truth about Benjamin and his widow, her beloved grandmother Lydia. The quest brings her into an archive that no scholar has ever seen, and to a person who knows things about her family that nobody else knows.

My review today is of Holding Her Breath by Eimear Ryan which was published on 17th June by Penguin Sandycove. My thanks to Rosanna Safaty for the review copy of the book.

Holding Her Breath has a pared back style to the writing with not a word that felt extraneous. I thought it was a strong debut by Eimear Ryan with characters that I found fascinatingly multifaceted.