It’s paperback publication day for All The Lonely People by Mike Gayle today. I listened to this book last year on Audible and adored it. For some reason I didn’t share my review on the blog then, so thought today would be a good day to tell you just how wonderful this book is.
From bestselling author Mike Gayle, All the Lonely People is by turns a funny and moving meditation on love, race, old age and friendship that will not only charm and uplift, but also remind you of the power of ordinary people to make an extraordinary difference.
From the back of the book
The truth is day after day drags by without him seeing a single soul.
Mike Gayle was born and raised in Birmingham. After graduating from Salford University with a degree in Sociology, he moved to London to pursue a career in journalism and worked as a Features Editor and agony uncle. He has written for a variety of publications including The Sunday Times, the Guardian and Cosmopolitan.
But Hubert Bird is lying.
The importance of community and friendship and being open to new opportunities are so important in the book. I think, especially in the times we are living through, it really speaks to us all. And if you are looking for a book which will make you feel uplifted right now, this book could just be the one. All The Lonely People was the first Mike Gayle book I have read but it most definitely won’t be the last – I loved it!
I finished the book with a huge lump in my throat. All The Lonely People is a wonderful life affirming book, beautifully written which tells Hubert’s story both in the past and present so well. There are so many memorable characters and I’ll never forget Hubert Bird. Having listened to this as an audiobook, I must just mention that Ben Onwukwe was a terrific narrator, bringing all the characters vividly to life. I can still hear Hubert’s voice in my head.
In weekly phone calls to his daughter in Australia, widower Hubert Bird paints a picture of the perfect retirement, packed with fun, friendship and fulfilment.
Mike became a full time novelist in 1997 following the publication of his Sunday Times top ten bestseller My Legendary Girlfriend, which was hailed by the Independent as ‘Full of belly laughs and painfully acute observations,’ and by The Times as ‘A funny, frank account of a hopeless romantic’. Since then he has written thirteen novels including Mr Commitment, Turning Thirty and The Man I Think I Know. His books have been translated into more than thirty languages.
Now Hubert faces a seemingly impossible task: to make his real life resemble his fake life before the truth comes out.
Along the way Hubert stumbles across a second chance at love, renews a cherished friendship and finds himself roped into an audacious community scheme that seeks to end loneliness once and for all . . .
Until, that is, he receives some good news – good news that in one way turns out to be the worst news ever, news that will force him out again, into a world he has long since turned his back on.
All The Lonely People is the story of Hubert Bird, a widower who really is lonely. His daughter Rose is a professor at a university in Australia and when she phones weekly, he manages to convince her that he is happy and active with lots of friends but this could not be further from the truth. An unexpected phone call and a chance meeting with new neighbour Ashleigh and her small daughter Layla, sends his small world into a spin and changes it in ways he never thought possible.
Life is certainly beginning to happen to Hubert Bird. But with the origin of his earlier isolation always lurking in the shadows will he ever get to live the life he’s pretended to have for so long?
You can find him online at mikegayle.co.uk and on Twitter @mikegayle.

About the author
Hubert Bird is not alone in being alone.
He just needs to realise it.
As well as finding out how things change for Hubert in the present, interspersed are chapters looking back at his life from his decision to move from Jamaica to London, the challenges and blatant racism he encountered when trying to find work, his meeting his wonderful and courageous wife Joyce and their family life together with all the difficulties and joys that brought. 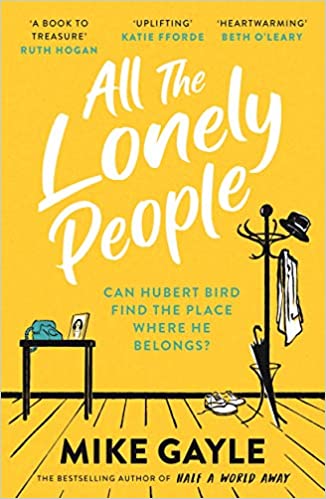