Charlotte kindly answered a few of my questions.
After fleeing Manchester for London, Constance attempts to put past tragedies behind her and make a fresh start. When she embarks on a relationship with the new doctor at the medical practice where she works, she’s convinced she’s finally found the love and security she craves.
Charlotte Levin has been shortlisted for the Andrea Badenoch Award, part of the New Writers North Awards, and for the Mslexia Short Story Competition. Charlotte lives in Manchester and If I Can’t Have You is her first novel.
I’m not a big fan of re-reading books. There’s so many I haven’t read that it feels like a waste of my precious reading time. But I’d happily study Nabokov’s writing and Revolutionary Road by Richard Yates, again and again, to try and analyse their technical brilliance.
About the Book
2. What inspired the book?
1. Tell us a little about If I Can’t Have You.
I’ve always been interested in psychology. And within that, I’m fascinated as to what makes good people do bad things. I’ve had my heart broken as most people have, and it’s awful. We feel out of control and drive our friends mad talking about it, but generally, it doesn’t go further than that. But I was interested in the idea of that happening to someone so damaged and suffering so much loss that they cross lines the average person wouldn’t. I wanted it to feel realistic. Constance isn’t your standard psycho stalker. She needed not to be for the book to work. And ideally, I wanted the reader to root for someone that, based on their actions, they probably shouldn’t. 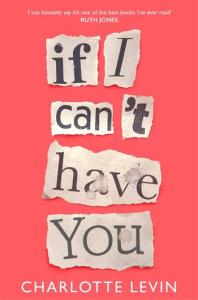 But if life has taught her anything, it’s that if you love someone, you should never let them go.
3. Are you a plan, plan, plan writer or do you sit down and see where the words take you?
My name is Constance Little.
This is my love story.
But this isn’t the way it was supposed to end.
Then he ends it.
Yes, I had always envisaged that you give your book to an editor and they go away and scribble all over it and move stuff around to make it into a much better book. But the process is so much more collaborative and organic and involves numerous drafts.
7. I like to end my Q&As with the same question so here we go. During all the Q&As and interviews you’ve done what question have you not been asked that you wish had been asked – and what’s the answer?
5. What do you do when you aren’t writing? What do you do to relax and get away from it all?
4. Having been through the publishing process, is there anything about the process of creating a novel that surprised you?
About the Author
That’s why for Constance Little, her obsession is only just beginning . . .
I used to read or watch TV to relax, yet I’ve struggled with both during the pandemic. But I have very recently discovered audiobooks, which I had dismissed for years because I thought I’d hate them and be unable to take it in. But it turns out I love them and find it super relaxing. I’m also a big fan of long baths!
Charlotte Levin’s debut novel If I Can’t Have You is released in paperback by Pan Macmillan on 4 February 2020.
I’m a mixture of the two. I couldn’t possibly outline a whole book! My writing is character-led, so the characters would end up refusing to do everything I set out for them. But I do work out my inciting incident and the first main plot point. I also have other random scenes in my head. I like to know what’s going to happen for three or so chapters ahead. Beyond that, I haven’t got a clue.
6. If you could only read one book for the rest of your life which book would it be?
Constance Little is an emotionally damaged young woman, struggling to cope with the loss of her mother. When she begins an intense affair with Samuel, the new doctor at the medical practice where she’s a receptionist, she’s finally found the love and security she craves. But for Samuel, it is just all a bit of fun, and when he ends things, Constance is unable to let it go. The novel is a letter to Samuel, an explanation of her increasing obsession and unravelling. Although it has thriller elements, it’s not a typical psychological thriller. There’s some dark humour too! It’s been described as Eleonor Oliphant meets YOU, which I think is a good summation.
That’s a tricky one. The question would be – What is the most important thing for writers to do to stand out in the crowd? And my answer would be to find out what you do well and do that. So many writers seem to try to and emulate other authors. Or attempt to be a type of writer that doesn’t suit their strengths. So, only do you. You’re better at it than anyone else.