Inspired by a personal moment of profound love and generosity, Trent Dalton, bestselling author and one of Australia’s finest journalists, spent two months in 2021 speaking to people from all walks of life, asking them one simple and direct question: ‘Can you please tell me a love story?’ The result is an immensely warm, poignant, funny and moving book about love in all its guises, including observations, reflections and stories of people falling into love, falling out of love, and never letting go of the loved ones in their hearts. A heartfelt, deep, wise and tingly tribute to the greatest thing we will never understand and the only thing we will ever really need: love.

He was nominated for a 2010 AFI Best Short Fiction screenplay award for his latest film, Glenn Owen Dodds, starring David Wenham. The film won the prestigious International Prix Canal award at the world’s largest short film festival, The Clermont-Ferrand International Short Film Festival in France. Dalton’s debut feature film screenplay, In the Silence, is currently in production.
Trent Dalton writes for the award-winning The Weekend Australian Magazine. A former assistant editor of The Courier-Mail, he has won a Walkley, been a four-time winner of the national News Awards Feature Journalist of the Year Award, and was named Queensland Journalist of the Year at the 2011 Clarion Awards for excellence in Queensland media. His writing includes several short and feature-length film screenplays. His latest feature film screenplay, Home, is a love story inspired by his non-fiction collection Detours: Stories from the Street (2011), the culmination of three months immersed in Brisbane’s homeless community, the proceeds of which went back to the 20 people featured within its pages. His journalism has twice been nominated for a United Nations of Australia Media Peace Award, and his debut novel Boy Swallows Universe was published in 2018.
Rich with humanity and hope, Love Stories is a timely reminder of both the importance and power of love. To end, my favourite quote: “Love is knowing when you’ve come home.” A blind man yearns to see the face of his wife of thirty years. A divorced mother has a secret love affair with a priest. A geologist discovers a three-minute video recorded by his wife before she died. A tree lopper’s heart falls in a forest. A working mum contemplates taking photographs of her late husband down from her fridge. A girl writes a last letter to the man she loves most, then sets it on fire. A palliative care nurse helps a dying woman converse with the angel at the end of her bed. A renowned 100-year-old scientist ponders the one great earthly puzzle he was never able to solve: ‘What is love?’

Trent also hosted the ABC Conversations show while Richard Fidler was on a Churchill Fellowship.
Trent Dalton, Australia’s best-loved writer, goes out into the world and asks a simple, direct question: ‘Can you please tell me a love story?’ 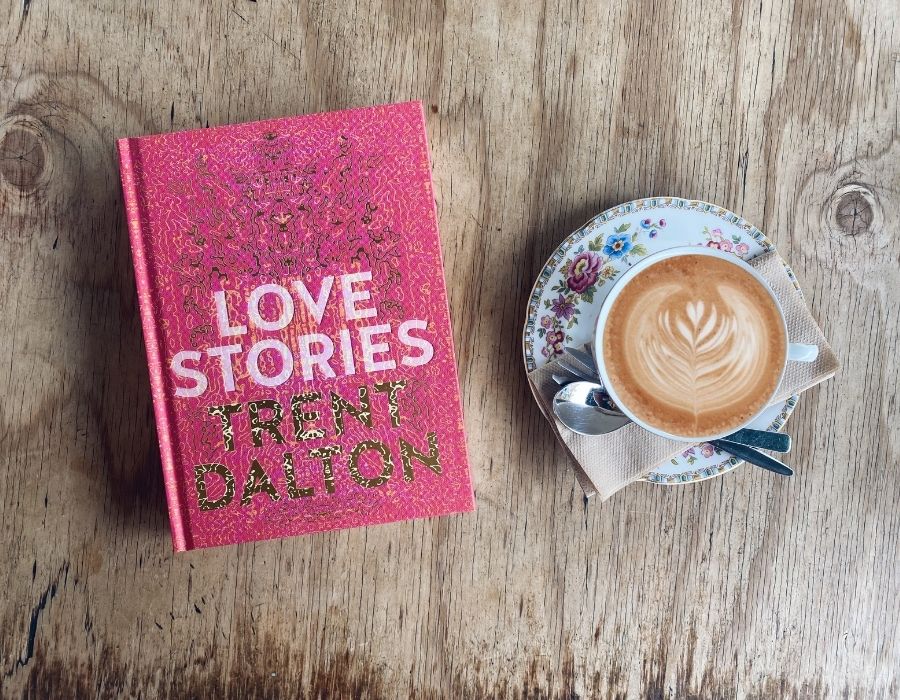 Trent Dalton has also written Boy Swallows Universe and All Our Shimmering Skies.

I loved this piece on The Australian: Can you tell me a love story? You can also read about the books Trent would take with him to a desert island here.

Trent Dalton is an author that can do absolutely no wrong in my eyes. One of the nicest people I’ve met – and also one of the most passionate and vibrant writers around – it’s easy to see why he’s amassed a legion of loyal fans since the publication of his debut novel, Boy Swallows Universe. Having devoured both his novels, when I heard that he had a new non-fiction out at the end of 2021, I eagerly awaited its publication, and it couldn’t have come at a better time. A book of love stories that were collected from passers-by on the side of a street in Brisbane, where Trent sat with a typewriter and a sign that read ‘sentimental writer collecting love stories’, Love Stories is everything and more than I had hoped it would be, and also offers the perfect remedy to the tense and turbulent eighteen months since Covid began.
My copy of Love Stories arrived the day before its publication, and despite being in the middle of another book, I started it immediately, and was just seven pages in when I first shed a tear. Shortly after the death of his good friend’s mother, Trent was left her old yet treasured typewriter. Moved by the poignancy of this gesture, and armed with his inherited Olivetti typewriter, Trent took to the streets of Brisbane to ask strangers to tell him a love story.
Moving, poignant and wholly profound, Love Stories is Trent at his very best. His warmth and affability truly shine through each and every story, and it’s impossible to read the tales of love, lust, longing, heartache and grief without having your faith in humanity and in love in all its forms restored.