As one reviewer wrote, ‘Christy and James felt like real people who I might know or meet in the local pub.’
When ambitious young journalist, Christy Jackson and mature property developer James Louden fall in love, life promises perfection. Until James makes a tragic discovery and Christy issues an ultimatum. As James descends into depression, Christy faces a daunting future. Can they recapture the life they’ve lost? Is it too much to ask?
4. Is there anything about the process of publishing a book that surprised you?
Wow. That’s a biggie! Possibly, based on years of contact with writers, ‘what compels you to write?’
P.D Elliott kindly answered a few of my questions.
Probably the length of time spent seeking an agent before a publisher even nibbles. It’s a frustrating – and sometimes demoralising – path which calls for patience, perseverance and resilience.
An almost impossible question to answer! Though I feel I ought to choose something erudite, if I’m honest I’d probably plump for anything by Joanna Trollope. To me, her writing’s so elegantly accessible and relationship-led I can recognise – and often identify with – her characters and their lives.
Falling in love, life together promises perfection. Until James makes a tragic discovery which leads Christy to issue an ultimatum. As he descends into depression, she faces a daunting future. Can they recapture the life they’ve lost? Is it too much to ask?
It’s a solitary, sometimes dispiriting, demanding occupation yet it can offer such satisfaction and elation that it becomes an addiction.
3. Are you a plan, plan, plan writer or do you sit down and see where the words take you?
About the Book
6. If you could only read one book for the rest of your life which book would it be?
Too Much To Ask is an emotional rollercoaster of love, loss and new life.
7. I like to end my Q&As with the same question so here we go. During all the Q&As and interviews you’ve done what question have you not been asked that you wish had been asked – and what’s the answer?
My greatest delights are spending time with my family and friends and visiting France. But, as we all know, during the pandemic those pleasures have been curtailed so reading’s been my escape. Reading and having very long philosophical debates with my husband. And I’m lucky to live in a small village with fields all around where our old labrador and I can take gentle walks.
1. Tell us a little about Too Much to Ask.
5. What do you do when you aren’t writing? What do you do to relax and get away from it all?
2. What inspired the book? 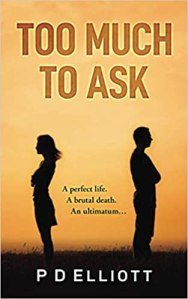 Too Much To Ask is the first of a (planned) trilogy with Too Much To Risk due out in the summer and Too Much To Lose towards the end of the year.
I’d love to be a rigorous planner. And I do try. But the bones of the storyline are often hijacked by my characters who take me down avenues I hadn’t anticipated.
With a background in psychology – and before turning to journalism – I worked as a Probation Officer where the effects of drug and alcohol issues on mental health and relationships were all too clear. And, having volunteered on a national suicide helpline, I was deeply concerned over the reported rise in young male suicides. So it became somehow inevitable that those two strands would weave their way into the storyline.
P. D. Elliott’s novel, Too Much to Ask was published on 5 February 2021.
Maya Angelou summed it up when she said, ‘There is no greater agony than bearing an untold story inside you.’
It’s a story told from the perspectives of both an ambitious young Manchester journalist, Christy Jackson, and a mature property developer, James Louden.