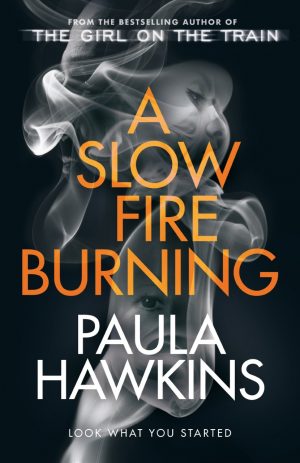 Paula Hawkins worked as a journalist for fifteen years before turning her hand to fiction. Born and brought up in Zimbabwe, Paula moved to London in 1989 and has lived there ever since. Her first thriller, The Girl on the Train, has been a global phenomenon, selling 23 million copies worldwide. Published in over forty languages, it has been a No.1 bestseller around the world and was a No.1 box office hit film starring Emily Blunt.

Follow the authorMiriam knows that just because Laura is witnessed leaving the scene of a horrific murder with blood on her clothes, that doesn’t mean she’s a killer. Bitter experience has taught her how easy it is to get caught in the wrong place at the wrong time.Innocent or guilty, everyone is damaged. Some are damaged enough to kill. Look what you started.My thanks to Anne Cater of Random Things Tours for the blog tour invite and to the publisher for the fabulous hardback proof copy for review.‘What is wrong with you?’Hawkins has constructed her characters in such a superb manner with anger and resentment simmering under the surface. I didn’t particularly like any of the main characters but then I don’t think I was meant to. The only person I felt any empathy for was Irene, an elderly neighbour, connected to Laura, and Carla’s sister Angela. Most have their own backstory, both traumatic and tragic. With so many themes running through this story including dysfunctional families, murder, revenge and greed, it’s not surprising that some characters are so traumatised and damaged. This is very much a slow burn of a story with some misdirection and obfuscation leading the reader in different directions until the author is ready to reveal another link in the puzzle.

Into the Water, her second stand-alone thriller, has also been a global No.1 bestseller, spending twenty weeks in the Sunday Times hardback fiction Top 10 bestseller list, and six weeks at No.1.
Carla is reeling from the brutal murder of her nephew. She trusts no one: good people are capable of terrible deeds. But how far will she go to find peace?

MY THOUGHTS
Miriam lives on the next boat and found the body. She’s an odd character and a real busybody, she keeps notes of everyone’s coming and goings, is fond of keeping things that don’t belong to her and also has secrets of her own. A young girl, Laura, has been seen coming away from the boat covered in blood. Following an accident, Laura has both psychological and physical problems and is very quick to flare up in temper which she can’t control. Carla has suffered a dreadful tragedy and in her grief stricken state is emotionally fragile. Her marriage to famed author Theo was broken from the fallout.
THE SCORCHING NEW THRILLER FROM THE BESTSELLING AUTHOR OF THE GIRL ON THE TRAIN and INTO THE WATER

ABOUT THE AUTHOR This is such a clever and complex thriller with so many layers to be revealed. I loved it.

ABOUT THE BOOK
A young man, Daniel, is found dead on a houseboat in Regent’s Canal however discovering who killed him won’t be easy. Three women, Miriam, Laura and Carla, all have a link to the victim in some way and any one of them could have had the opportunity – but are they killers?
Publisher: Doubleday
Format: All (31 August 2021)
Pages: 320
Source: Copy received for review Laura has spent most of her life being judged. She’s seen as hot-tempered, troubled, a loner. Some even call her dangerous.
Other reviews