The project I am currently working on, and which will likely be released in 2022, features romanticism and neoclassicism. However, what compelled me to write a book that opens in 1813 was not so much the feeling the era gave me as it was the plethora of interesting historical figures who I wanted to portray. Real historical figures have become essential to me when I write, and I strive to make the people of the past come to life at least in my head. That way, I feel closer to history, which is after all the subject I am by far the most passionate about.
The First World War casts its shadow over seventeen-year-old Rosalie Wilkes’ idyllic life. Unwilling to sit idle, Rosalie lies about her age and signs up as a voluntary Red Cross nurse. Stationed at a hospital in Rouen, France, she has to face the consequences of modern warfare. Meanwhile, her fiancé and her brother are risking their lives on the ground and in the air.
Charles D’Aboville is forced to abandon his studies in Paris and become a junior officer. As such, he must lead men into battle and watch death reap more than its due. When Charles is wounded in an explosion, he is sent to Rouen to recover. There, a secret relationship begins to form. The war threatens to tear Charles’ and Rosalie’s lives to shreds. But might it instead make freedom possible?
The most recent book I published, Princess of Thorns, is set during the last years of the Wars of the Roses and the early Tudor reign. I was and am incredibly invested in this era—that tends to happen when you get nitty-gritty with warring factions and start to take sides yourself. I have long been of the opinion that the Tudors have received too much attention in comparison to the Plantagenets, just like the Second World War has in comparison to the First World War. In general, though, just like with A Generation of Poppies, what made me write Princess of Thorns was above all a feeling. This feeling can be described as whispers behind closed wooden doors, creaking castles, blood feud, courtly love, and brutal battlefields clashing with the last surge of chivalry.
Although Saga Hillbom has been a guest on the blog several times, his is the first of her books I have read and I was impressed with the level of historical detail included. There has obviously been a lot of research carried out and I was particularly moved by the famous Christmas truce. It showed so clearly that these soldiers were just ordinary young boys from different countries, doing what they were told in a situation not of their making.
My debut novel, A Generation of Poppies, was released in its first edition in early 2018 and will be released in its second, rewritten edition on the 1st of September 2021. I have spent more time with this book than with any of my other works, for obvious reasons, yet I still find its topics immensely interesting. A Generation of Poppies can best be summarized as a love story set during the First World War and in the early 1920s. When I began writing the original version, it was in a rush of inspiration derived from reading classics such as E.M Remarque’s All Quiet On the Western Front and The Road Back. Now, several years later, my interest in the war has a deeper dimension to it, but regardless of all the interesting research I have done, I tend to come back to the same feeling. I find it fascinating how much the world changed over such a short period. I find it fascinating how, in 1914, officers were issued swords to lead frontal attacks with, while in 1918 many elements of modern aerial warfare had been developed. Furthermore, there is something fundamental about the sheer tragedy, suffering, and to a certain extent pointlessness of it all that resonated with me. In my experience, it is relatively easy to write strong prose about horrific events.
For my novel set in Ancient Greece, City of Bronze, City of Silver, the feeling was marble temples, mysterious rites, blazing sun, turquoise waters, and tightly packed houses of limestone. For Today Dauphine Tomorrow Nothing, it was the gilded Hall of Mirrors in Versailles, smudged charcoal sketches, and an odour of disease and strong perfume.
Hopefully, I have managed to give you some idea of why I have found various eras and people interesting to write about. I want to emphasize that while there is absolutely nothing wrong in having a favourite type of historical fiction, try expanding your horizon. The same goes for books in general and history as a whole. Often, I only discover how intriguing something is once I actually start to write about it. The idea and the temptation is there from the start, but the more I find out, the more I want to learn and the more I want to write. I personally cannot yet imagine confining myself to studying just one part of history or even just one century. In the future, I would like my novels to cover the deposition of Richard II, the Italian renaissance, Ancient Rome, the 1950s, La Belle Epoque… The list goes on!

I sometimes get asked why I write historical novels set in vastly different eras, rather than just focus on the events and people I find the most interesting and know the most about. The answer is simply that I find too many historical periods intriguing to limit myself to just one. In fact, I want to explore societies from both ends of the time spectrum, from Ancient Greece to the 20th century and everything in between. As a result, I have written books set in Athens and Sparta roughly 400 BC, in 15th century England, at the court of Louis XIV, during the Napoleonic Wars, and during the First World War.

“We were a generation of poppies. Rose, ploughed down and ground to sticky red dust.”

A Remembrance of Poppies – from the back of the book

A Generation of Poppies is the story of two young people navigating through horror, longing, and doubt. It is also a story of persistent hope.

I had noticed that all the author’s books have been set in very different historical periods and asked her why she chose such different eras to write about. Here’s what she had to say.
I would like to finish by thanking Joanne for letting me write this guest post 🙂
The first person present tense narrative gives a very immediate feel to the story, making you feel like you are experiencing the horrors of war alongside Rosalie and Charles. There are also scenes from before the war where we get to know what life was like for them then and the book also follows them after the war. It shows them to be ordinary everyday people with hopes and dreams like everyone else, past and present. This contrast is striking. I often think about how ordinary people were flung into the horrors of war and how they coped (or not) with the fear, dangers and atrocities they saw. Hillbom conveys this so well.
I’m pleased to welcome Saga Hillbom back to the blog. A Generation of Poppies was her debut novel and is due to be re-released on 1st September. First of all, here are my thoughts on the book.
A Generation of Poppies is the story of young English girl Rosalie, working as a volunteer Red Cross nurse in Rouen during the First World War and Charles who had been a student in Paris but is now an inexperienced army officer leading his men into some of the bloodiest battles of the war. They meet when he is injured and taken to the hospital to recuperate.
You’ll find buying links for all Saga Hillbom’s book on her Amazon page here.
Although the somewhat secret romance between the two main characters is important to the story, to me this was ultimately a story of hope in times of great adversity. Hope that, despite the horrors of war, despite everything, there would be a brighter future ahead. Saga Hillbom has written an absorbing tale blending history and romance, set in a harrowing and momentous era. 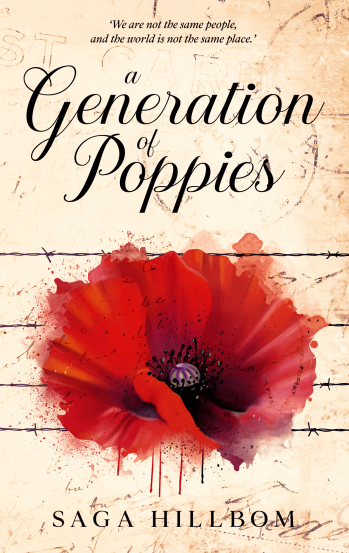 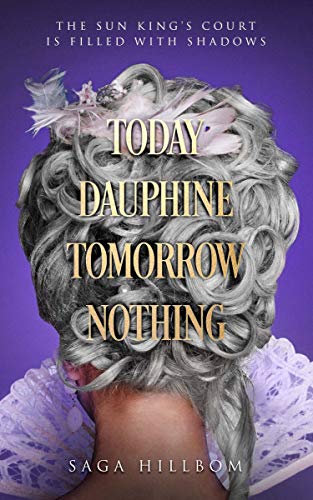